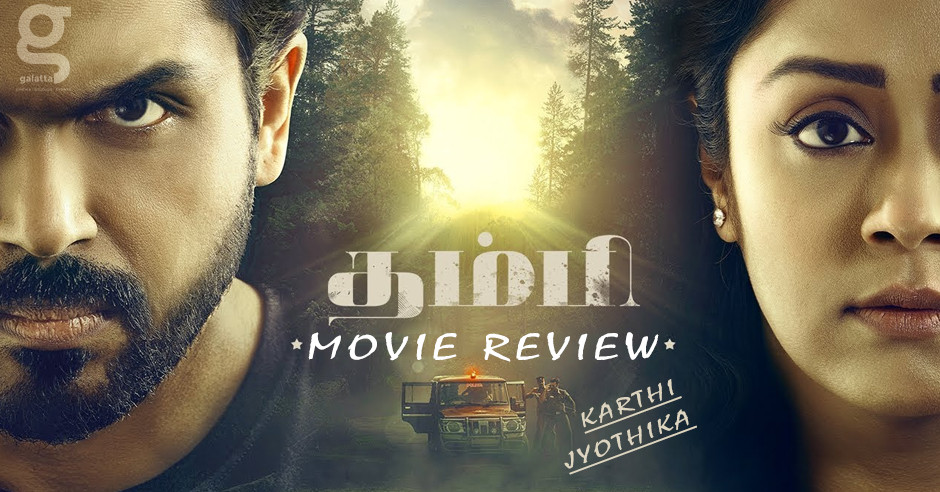 After a super successful outing with the intense action drama, Kaithi, Karthi is now back with his next, this time co-starring his anni Jyotika. The Jeethu Joseph directed thriller, Thambi has released today amidst good expectations. The promotional videos and the trailer looked quite promising and added curiosity. Has the film got the potential to work among the masses? Read on the review to know.

An estranged son Saravanan (Karthi) reunites with his family after a long gap of 15 years. But is he really Gnanamoorthy's (Sathyaraj) son and Parvathy’s (Jyotika) thambi or is he faking it? Get to know the answer as the mystery gets unveiled in the film.

Karthi takes the film forward with his natural performance and he ultimately scores well. He is multi dimensional and is able to put out a performance that is arresting. He is able to connect with the masses with his lively and casual attitude. His timing counters and body language blend neatly with the film’s setting. His conversations with his heart are interesting to watch. The light hearted and fun loving Karthi in the first half is a delight to watch.

Jyotika stages a sharp act with her character that is filled with a lot of emotions. Her combination scenes with Karthi work in the favour. She makes no mistake and lends her support aptly. Sathyaraj gets a meaty role and the veteran performer aces it with perfection. Nikhila Vimal looks beautiful on screen and delivers a very good performance.Despite appearing only for a few scenes, Super Deluxe fame Ashwanth helps in bringing in a few laughs. Anson Paul has a good potential actor inside him.

The screenplay is penned neatly and the engagement is built gradually in an organic manner. The scenes are developed in a way that it maintains the suspense factor until the very last and the writing is note-worthy. As the originality of each and every character gets unfolded, things get more and more interesting and keeps the audience hooked.

The main strength of Thambi is its writing that keeps the audience engaged. Ample credits to the film’s writers Rensil D’Silva, Sameer Arora, Jeethu Joseph and K Manikandan. Jeethu Joseph’s execution is clear and he gets most things right. The climax reveal is good and it has the potential to grab the audience’s attention. The film demands a certain level of patience and if you have it, then you are in for a satisfying engaging thriller. Else, you will have a lesser impactful film.

On the flipside, a few cinematic liberties have been taken and there are logical loopholes that aren’t answered until the very end. There is a dip in engagement post the interval and the momentum picks up only from the pre-climax. The fight sequences are merely done for commercial reasons and it doesn’t gel along with the film’s premise. The slow pace of the film could be a concern for a section of audience.

Govind Vasantha’s background score travels throughout the film and he makes the emotions count. Cinematographer R.D.Rajasekhar captures the beauty of the hill stations through his lens and he picturises the scenes aesthetically with his neat compositions.

Verdict :Thambi is a well-written; engaging family drama that will attract the family audience!

Thambi is a Tamil movie. Karthi,Jyothika,Sathyaraj are part of the cast of Thambi. The movie is directed by Jeethu Joseph Music is by Govind Vasantha . Production Reliance Entertainment.