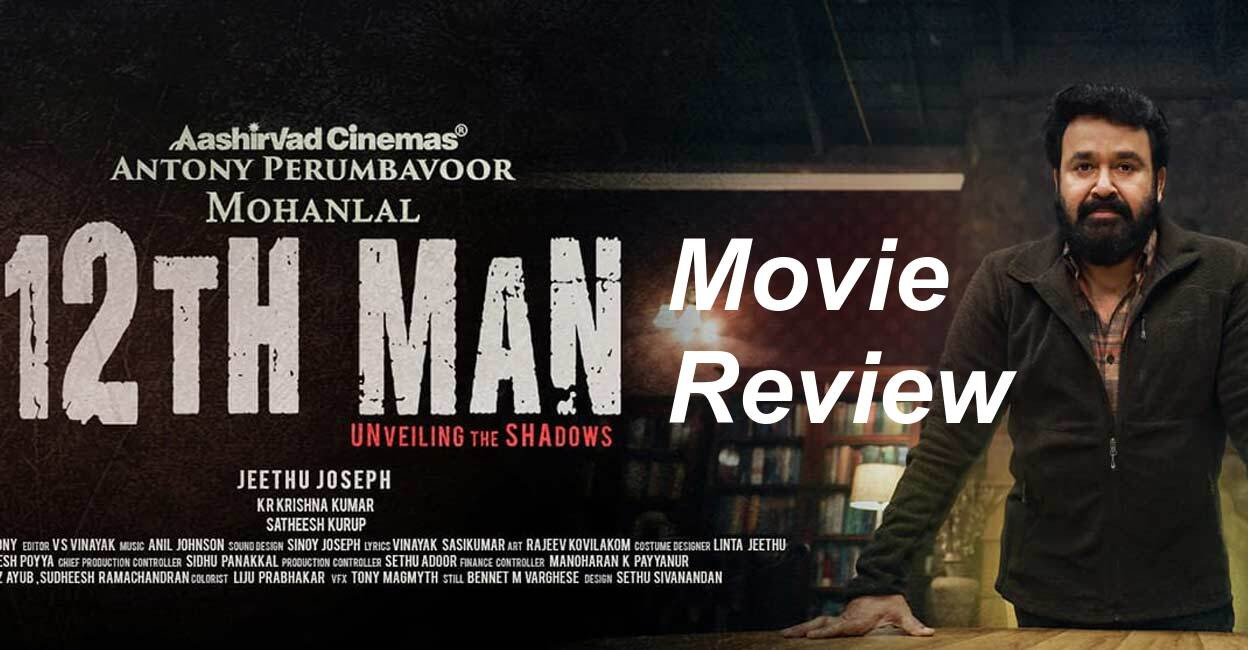 Cast : Mohan Lal, Saiju Kurup, Leona Lishoy, Chandhunath, Unni Mukundan, Anu Sithara,
Production : Aashirvad Cinemas
Director : Jeethu Joseph
Music Director : Anil Johnson
The film is not unwatchable, exactly. But none of the characters are terribly interesting, so it never matters who the culprit is going to be.

Jeethu Joseph's 12th Man opens with a secret that quickly is told to someone, who tells it to someone else, and so on – until the secret is no longer a secret. The film's centrepiece is a woman’s death, which leads to more secrets. That's why there's a subtitle: Unveiling the Shadows. The 11 characters are a group of very close friends. But how close is "close"? And how do you define a "friend"? Are friends just people who meet at Diwali parties and go to resorts during vacations, like in this movie? Or are they people who genuinely help each other when in need? Do they make sacrifices even if it means that their reputation takes a hit? Don't worry. 12th Man isn't an existential study. But it does make you wonder how this group of friends has remained friends all this time. If only they knew at the beginning what they know about one another at the end!

The film is an Agatha Christie-style mystery, where Mohanlal plays Hercule Poirot. In those books, it is only at the end that Poirot gathers everyone together and announces his deductions by leaping from one possible suspect to another. Here, Mohanlal's entire investigation is conducted at a Last Supper-like table with everyone being a suspect at some point, and everyone revealing a secret at some point. I wondered who in their sane mind – I mean, people who have serious secrets – would agree to a game where everyone around gets to listen to their phone calls and read their messages. That is what sets off the crime. I also wondered why they wasted some 45 minutes trying to make us think Mohanlal is some kind of drunkard-buffoon. Flab is the enemy of a tense thriller, and without that huge opening portion, we might have been left with a more watchable movie.

12th Man is not unwatchable, exactly. And you cannot expect constant sixers from the Mohanlal-Jeethu Joseph combination. But the film is talky and dull. It is filled with reaction shots and a needlessly showy technique that morphs locations. None of the characters are terribly interesting, so it never matters who the culprit is going to be. But most importantly, none of the revelations have that oh-wow feeling. I kept hoping that the explanation for the death had better be good, given how many red herrings we are being fed. But the ending doesn't have that oh-wow quality either. The real culprit is the screenplay. The lack of serious effort really shows. Mohanlal can do these roles in his sleep, but crime-film writers have to be constantly awake, no?

The thrilling first teaser of Mohanlal's 12th Man is here - do check it out!!

Mohanlal's next film gets a big massive announcement - exciting news for fans!

Mohanlal's 12th Man gets officially launched - the blockbuster Drishyam combo is back!