Raj Singh Chaudhary's 'Thar', on Netflix, is a neo-Western that sets up an interesting premise and does very little with it 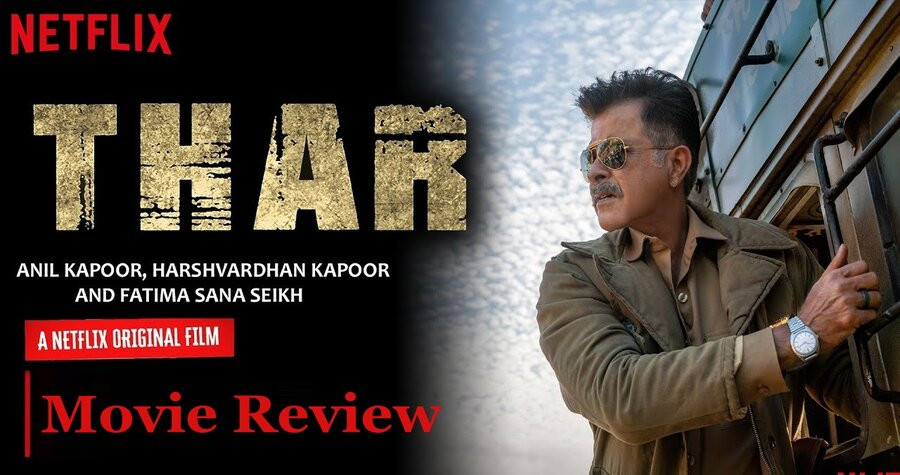 Cast : Anil Kapoor, Harshvardhan Kapoor, Fatima Sana Shaikh, Jitendra Joshi, Akshay Oberoi, Satish Kaushik, Mukti Mohan,
Production : Anil Kapoor Films Company
Director : Raj Singh Chaudhary
Music Director : Ajay Jayanthi
None of these characters or situations are written with any depth, and apart from veterans Anil Kapoor and Satish Kaushik, no one is capable of fashioning at least the semblance of a flesh-and-blood person on their own.

The lay of the land is laid out in the most brilliantly poetic fashion in Thar, a kind of neo-Western directed by Raj Singh Chaudhary. (The voiceover-words are dazzling, and I suspect this is why we get the thank-you card to Gulzar.) Anil Kapoor plays the ageing-Sheriff equivalent, an inspector named Surekha Singh. He is stuck in this one-horse border town in Rajasthan, and he isn't entirely happy about the lack of upward mobility in his career. But his wife is relieved that all he has to do is solve petty crimes, nothing dangerous. Besides, she knows he cannot deal with hierarchical politics. Their son, however, says he will study for the IPS exam, become a cop, and lord over his father. These little "character touches" paint a picture of a man who is so not prepared for what's about to happen.

Someone is butchered and killed. A couple is shot dead while their daughter is making out with her lover. Things are stolen. Anurag Kashyap is the dialogue-writer. His delightfully vulgar phrasings add a ton of flavour to the classically visualised narrative, which is painted in the colours of the desert. Every image, right down to the costumes, is colour-coordinated with the Thar. There isn't one colour that clashes. This is a gorgeous-looking movie, and this makes the ugliness at its centre even more ugly. Going back to the Western analogies, Harshvardhan Kapoor plays the mysterious stranger in town, and the typical "saloon" is replaced by a teahouse. Satish Kaushik plays the Sheriff's sidekick, who is as unprepared as his master to smoke out the culprit.

The premise is interesting especially in the set-up stage, and unlike the old-time Westerns, there is some social commentary scattered throughout. The patriarchy blames the woman for a couple's childlessness. A man slaps his wife for allowing a stranger to visit their home when he was away. (It's a sawaal to his izzat.) There are a few lines about oppressed castes. Dacoits used to belong to these castes, and even today, a man belonging to these castes is shunned. Let's say he opens a teashop of his own. He'd end up with no patrons. The film even touches on the general lack of education in these parts, which makes a literate man stand out.

The narrative is woven from two strands. The first is whether Anil Kapoor will crack the case. The second is what the Harshvardhan Kapoor character is really after and why, especially when we see the things he does. (When we do find out, it's utterly underwhelming.) And in between, we have opium smuggling across the border, back and forth. A man named Hanif Khan is presented as the poster-boy smuggler, but none of these characters or situations (like an affair we see early on) are written with any depth. And without any help from the writing, no one apart from veterans Anil Kapoor and Satish Kaushik is capable of fashioning at least the semblance of a flesh-and-blood person on their own. Harshvardhan Kapoor and Fatima Sana Shaikh appear miscast in this milieu. Their characters do not register the rage inside them. The only aspect detailed with care is the graphic violence.

I think the makers were going for a slow-burn Chinatown-styled narrative, where you peel off one layer and there's another, and you peel off that layer and there's yet another. Also, there's the plot point about a man who sets out to solve a case and gets overwhelmed by the circumstances. But one, there are not all that many layers, and two, the layers that do exist aren't terribly interesting. The writing is as spare as the desert, clean and uncluttered – but this lack of texture also robs the story of momentum. The segues between one scene to the next seem airless and still, while they should really be accelerating at least in our minds (if not on screen). This is not about feeling for the characters, but about being involved with them or invested in their fate. By the time Thar winds down, you are left with more questions than answers. But well, at least the film looks beautiful!

New funny scene from Koogle Kuttapa is out - watch the sneak peek here!

Here is the brand new trailer of GV Prakash's next film, Ayngaran! Check it out here!!

Director Atlee reviews Kaathuvaakula Rendu Kaadhal | check what he has to say about the film!

The thrilling first teaser of Mohanlal's 12th Man is here - do check it out!!

The first review of Vijay Sethupathi's Kaathuvaakula Rendu Kaadhal is here! Check out!

Suriya once again shows his humanitarian side with this grand gesture - check it out!!