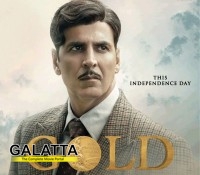 Starts with 1936 Olypics. Akshay Kumar is British India's Hockey team manager. After How he brings up the team with passion after several hurdles form the rest of the story. Akshay Kumar sits in the thick of his character, his performance easily elevates his emotional patriotic intentions. Except for one scene, his wife's presence was needless as nowhere the sctipt keeps her in the limelight. Supporting artists have formed as a good team of talents. One of the committee member's character follows the regular face-off type.

Production value is rich and enhances the director's vision. Also, gives a solid scope for the art department to make things look authentic. The Hockey matches choreography is beautifully done, the game keeps us hooked tightly. The base is strongly built, showing the pain we faced during British India, so the sentiments heat up automatically. There is a good emotional connect and measured patriotic feel throughout the movie.

Reema Kagti's direction has to be appreciated as the intent is extremely passionate. Story is predictable, but the track which shows our struggle to climb up is impressive. Screenplay is engaging, though the pace drops down at some places, the content and fresh situations keeps the flow on move, also the film wrap us up with powerful grip in the final 30mins. Dialogues are intact and never missed out to cover up the conflicts.

Songs are just average. The placements are old-school and unfortunately there are three unwanted songs to spoil the continuity. But the background score packs a punch. the tension grows on and on during the nail-biting Hockey match sequences with the help of Sachin-Jigar's music. There are certain momebts which are unnecessary to this kind of movie, but they also exist not to make us feel dry. Costumes, hairstyle goes well with the story's timeline.

Camera work was outstanding, the lighting to suit old period, the angles during the Hockey matches and the ultra slow-motion technology used for the same give us an awesome visual experience. Editing is also good at many portions, but at least two songs would have easily been cut. The national anthem climax moment speeds up the heartbeat level.

Verdict: A passionately made engaging sports drama that is truthful to its genre

WOW: Suriya becomes the first-ever South Indian actor to get this huge honour - an invite from the OSCARS!

Premam director Alphonse Puthren makes a much important announcement on his next!

"Don't expect KGF, RRR, or Vikram from my movie", this star director reveals!

A small change in KGF 2 Tamil - new version to be screened in theatres from today - here is what you need to know!

The most important life lessons everyone must learn from KGF: Chapter 2 - Don't Miss!

Madhavan's son wins a GOLD Medal for India - full details out! Check out!