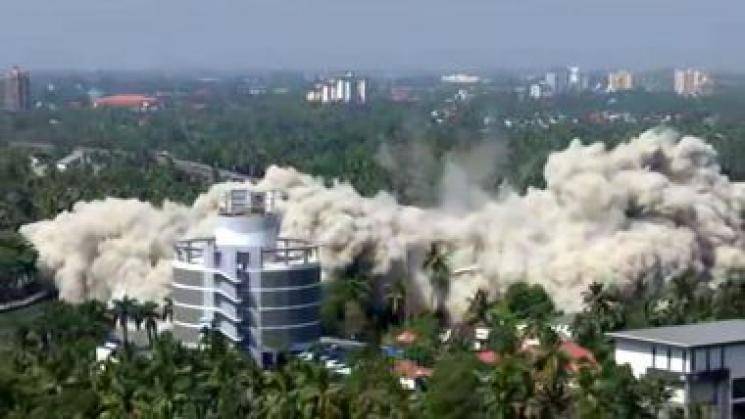 Kochi: Two flat complexes - the 18-storeyed Holy Faith H2O and 16-storeyed Alfa Serene twin towers - at Maradu municipality in Kochi were razed down on Saturday on the orders of the Supreme Court, which had passed a verdict to the effect in a case dealing with the violation of Coastal Regulation Zone (CRZ) rules.

Maradu became a spot of major attraction on Saturday, what with the number of people who arrived to witness the demolition. The authorities timed the demolitions with three sirens, but the sirens themselves were late - reportedly helicopters from the Indian NAvy had to finish the recce of the area before the implosion could be ordered. Hundreds of residents of the area were evacuated earlier on as a precaution.

It's not known whether the twin towers exploded as per the plan as the dust particles fell all around, including into the backwaters. Reports said the controlled implosion of the second towers may not have gone as perfectly as planned. Before the operation, it was made known that a total of 943 kg explosives will be used to demolish the four buildings, at a cost of Rs 2.32 crore.

Two other apartment complexes - Jains Coral Cove and Golden Kayaloram - will be demolished on Sunday.

When the state had begun legal proceedings against the four luxury flats, the builders had washed their hands off the properties, leaving scores of people who had paid from 50 lakh to Rs 1.5 crore for each flat, to fend for themselves. The court has ordered them an interim relief of 25 lakh. Some of them had used their life's savings to buy a flat here.