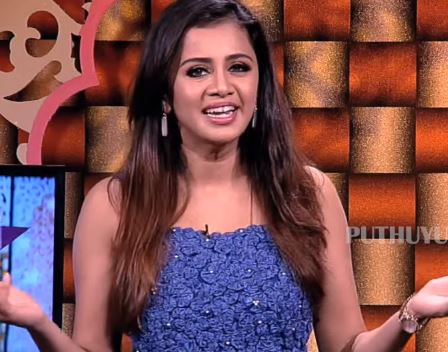 Popular television VJ Anjana is one of the few small screen stars with a huge fan base. After a prolific career with Sun TV Anjana took a break from anchoring after she got pregnant in 2017. Anjana and Kayal Chandran now called as Chandramouli got married on March 10, 2016, and the couple became proud parents in June 2018.

After a brief break Anjana came back to the small screens but this time for the channal Zee Tamil to host the third season of the hit show Junior Super Stars. And now, Anjana will be collobarating with PuthuYugam TV to host the popular celebrity talk show Natchathira Jannal.

The promo of the talk show came out on Friday and got the attention of everyone. The promo also revealed that the show will be aired every Sunday at 11 AM starting this week.

The promo has gone viral on social media as fans and celebrities wished Anjana for the success of her show. Notably in a tweet, Anjana also revealed that she will also be hosting Juniour Super Stars simultaliously.

Here is the viral promo video,