Dhanush and Nithya Menen are in top form in Mithran Jawahar's 'Thiruchitrambalam', which is filled with a lovely, low-key charm 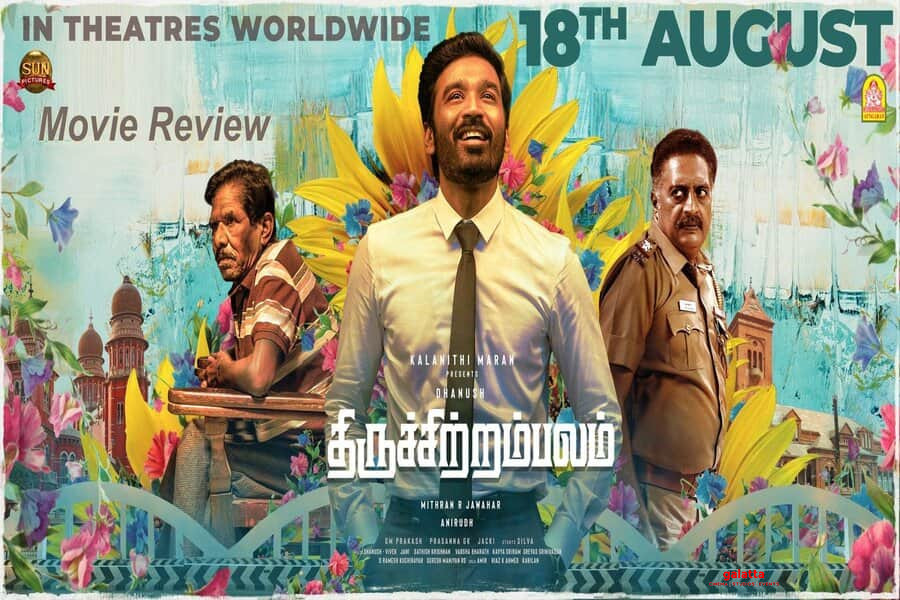 Mithran Jawahar's Thiruchitrambalam is named after the lead character played by Dhanush. Thiru liked a girl in school, but he stepped aside because he felt she was out of his league. Later, too, as a grown-up, when he sees her as a woman, he doesn't go up and say hello. It may be low self-esteem. It may be the fact that he did not go to college and he's now a food-delivery guy and he thinks she is still out of his league, given that she lives in a posh flat and orders food worth thousands of rupees. Or it may be it's the fact that there is something broken about him. That is the film's first line, which we hear in Thiru's voiceover: Life is like a piece of glass. Even a small crack makes it break. That small crack in Thiru's life is a tragedy that occurred when he was a boy, and his life stays broken despite the best efforts of his neighbour and best friend, Shobana, played by Nithya Menen.

Thiru and Shobana couldn't be more different, and the reason Thiruchitrambalam works is because of the utterly convincing non-chemistry between Dhanush and Nithya Menen. She is a bundle of energy, filled with positivity and a can-do spirit. Thiru is filled with negativity and a no-can-do spirit. She is brave, bold. He is scared of getting into a fight, even when she is insulted by a bunch of jerks in a movie theatre. He drives a Scooty, while she wants to see him on a more "gethu" bike. Sometimes, we think only about the bad things we perceive about our lives. Oh, my career is shit! Oh, my relationship with my father is shit! Oh, my love life is shit! And we end up full of self-pity. Thiru is that guy. Shobana always cheers him up. She always has his back. And yet, he remains a beer-drinking moper. Dhanush and Nithya Menen sell their characters so marvellously that we don't stop and think why this girl is still friends with this guy. We buy this relationship completely.

The other relationship that works beautifully is the one Thiru shares with his grandfather, who is an older version of Shobana. The old man holds the house together with his humour and practical attitude. Bharathiraja is excellent in this role. He feels like the human equivalent of that old and favourite and super-comfortable tee-shirt that we still wear, that we can't bear to discard despite the holes in it. The scene where he talks about his love life is a cracker - and it's one of many. The other resident of the household is Prakash Raj, who is a cop. He, again, is superb, as is the old couple who play Thiru's maternal grandparents. This is such a well-cast film – and well-shot film, by Om Prakash – that we manage to overlook Raashi Khanna and Priya Bhavani Shankar, the only two actors who give generic "heroine" performances.

Thiruchitrambalam is proof that you don't need a brand-new, groundbreaking, earth-shaking story to make a good, relatable movie. The screenplay is filled with VIP-like clichés, and it works because each cliché is put across so well by this cast. And by the director, who keeps finding new ways to present these old events. He gives us a funny scene with a facepack. He gives us Anirudh's loveliest song, Megam karukkadha, like a dance number from a 1950s Hollywood musical. He gives us the feel of a G-rated Selvaraghavan, his mentor, with closely packed houses and local dance competitions. But most importantly, he gives us a film that has a lovely, low-key charm.

I know. "Low-key" does not sound like a ringing endorsement, but this is exactly the secret strength of Thiruchitrambalam. That Hollywood-style number may not be low-key, but the way it begins, with an event as ordinary as Shobana picking up Thiru, is as low-key as it gets. The way someone says (rightly) that flirting doesn't mean love, the way a tragic flashback is slipped in, the way the interval point steers clear of major melodrama despite a man in a hospital, the way a family meets estranged relations, the way a son casually tells his father (over dinner) about his love failure, the way a woman who is sleeping in the middle-berth of a sexond-class compartment gets down holding the chain and joins her friends – everything is so charmingly low-key, including the film's only fight scene. Anirudh does not pump up the background score. And there is no action "choreography". The people fight like we would, using whatever they can get their hands on, like a stone or a lamppost.

The finest, most beautifully shot scene is a low-key confrontaton between father and son: usually, the camera's focus stays on the person who speaks, but here, it stays on the one who listens with a tear running down his cheek. Even the story's big metaphor - showing a family's paralysis slowly getting cured - is wonderfully low-key. I suppose that's why they wanted that big and very "cinematic" last quarter. It drags on quite a bit, especially given that we know the outcome. The tone of the film is still low-key, but the charm evaporates a little. Even so, by the end, I had tears and the last scene made me smile. When I heard the film had Dhanush with three heroines, I thought we'd get a rom-com. But Mithran Jawahar has given us a charming family drama, or rather, a drama that shows us that friends are practically family.

BREAKING: Director Bharathiraja's first statement about his health after being admitted to hospital - OFFICIAL!

The much-awaited bonus video from Dhanush's Thiruchitrambalam is officially out | special treat for fans!

With Thiruchitrambalam becoming a blockbuster, here are 10 Dhanush films that have high repeat value! Check it out!

Dhanush and Aishwarya Rajinikanth spotted together for the first time after their separation - Check out!