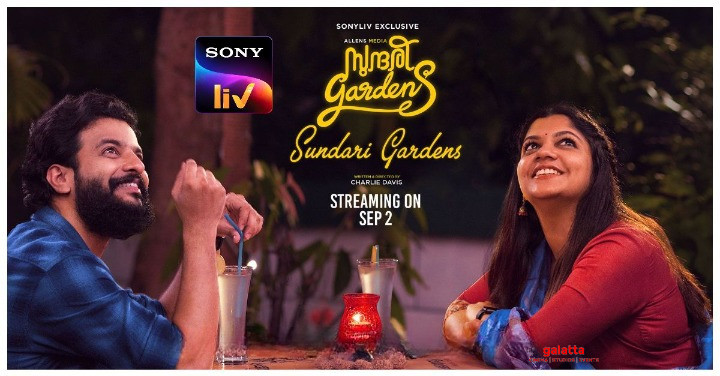 The press note for Sundari Gardens, directed by Charlie Davis, has this synopsis: "Our protagonist is Sundari Mathews popularly known as Suma. She is a quirky, geeky and bold school librarian. She lives with her mother. Suma meets Victor, the school's new English teacher. Through several meetings, Suma and Victor get to know each other. Over the course of several months, Suma falls for Victor. Suma decides to follow her heart despite the apparently overwhelming implausibilities." You're probably thinking, as I did, that we are in for a sweet rom-com, or a light romantic drama. But the story we get has cancer, divorce, domestic abuse, teen pregnancy, Facebook stalking, sibling rivalry… The film feels like that synopsis. It underplays everything. It opens with an image of rain, and behind there's blurred greenery. It's the most soothing image you can find to open a movie with this subject matter.

Sundari Gardens is similarly soothing. Part of it has to do with the attitude of the protagonist, played by Aparna Balamurali. Even the biggest, most tragic of happenings – to her or to those around her – are treated with a casual, practical attitude. There's no melodrama in Suma and there's no melodrama in the movie. Even love (Neeraj  Madhav plays Victor) is treated with the lightest of touches. The film feels like the scene where we see Suma dancing in her bedroom. It feels like a music video, filled with wall-to-wall music and slo-mo shots. This is an easy watch, and that may be enough for some viewers – but I found it too easy a watch. Aparna Balamurali is good, navigating a series of micro-moods. But given the things that happen, I would have liked a little more grit. The plot is a storm. The treatment is like a gentle sea breeze. Everything the characters feel on screen blows right past you.