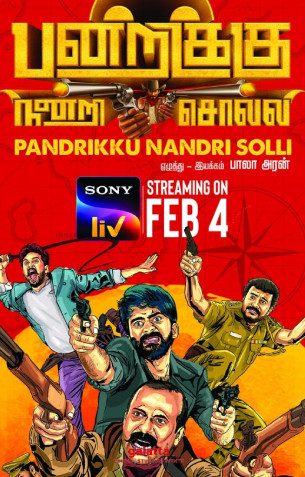 Pandrikku Nandri Solli is a black comedy directed by debutant Bala Aran. The movie plays out almost like a cat and mouse treasure hunt where all the characters in the movie only have one goal..... to find the treasure that will lead to their fortune.

STORY:
Pandrikku Nandri Solli plays out like a treasure hunt where all characters of the film are certain of a highly valuable artifact that will bring them great fortune. The main lead of the movie ends up with an important clue at the very beginning of the film and thus the havoc ensues which is portrayed with some dark humour.

SCREENPLAY, DIALOGUES AND DIRECTION:
The movie is written with good thought and precision. Many scenes start off with the characters mid-scene so we can't help but wonder what got them there. Information regarding this is slowly unravelled as the movie plays out. However, the scenes are built, disregarding the monologue that opens the movie, which is brilliant, the dialogues are a bit questionable. Some things that the gangsters say in the film are highly questionable. It is like something a child from school would say. Conversations between the characters sometimes feel very unnatural that may take the audience out of the movie disrupting their attention and experience while watching. It is kind of lacklustre and does not deliver at a few points.

The movie has quite an interesting premise which is let down by an ineffective execution. The film is directed haphazardly. The cast seems like they are not given enough direction as their performance is not all that great. There are many loopholes that are not covered but are excusable given the film's running is not all that affected by it. It is funny at places and also knows when to stop, unlike some films that extend their jokes to get more laughs but ultimately lose the audience in the midst of it.

CAST:
The film is full of new faces who look like they've tried their utmost best to do justice to their characters. Nishanth, who plays Deva, is the lead in the film. His performance and dialogue delivery weren't something that would make the audience get up from their seats and pump their fists in the air. Most it would do is make them shrug their shoulder and shrug off what they just saw. Vijay Sathya as Saagavaram was a comical villain. It is not known whether that was intended but it works. It would've been a bit better if his role as a gangster brings both seriousness and humor at the same time as it would work well with the genre being a dark comedy.

Viyan, who plays the sidekick to Saagavaram in his pursuit for the treasure, was great. His performance stands out for being comical and funny. The guy who plays Vidhimurugan, a cop, does not bring a cop-like demeanour at all. He seems like a pawn in a game of chess that is the least uncared for.

TECHNICAL:
The cinematography by Vignesh Selvaraj was just about okay and one is not sure if it was due to the budget constraints. However, the lighting, framing, and composition looked neat in some places. Suren Vikhas who was in charge of the music also performed well. The background score was engaging and the music that plays mid scenes to support the scene and the lay groundwork was well thought out and well suited.

SO?
Pandrikku Nandri Solli starts out on a promising note but loses its fizz eventually!

Verdict Pandrikku Nandri Solli has fun moments, but works only in places!