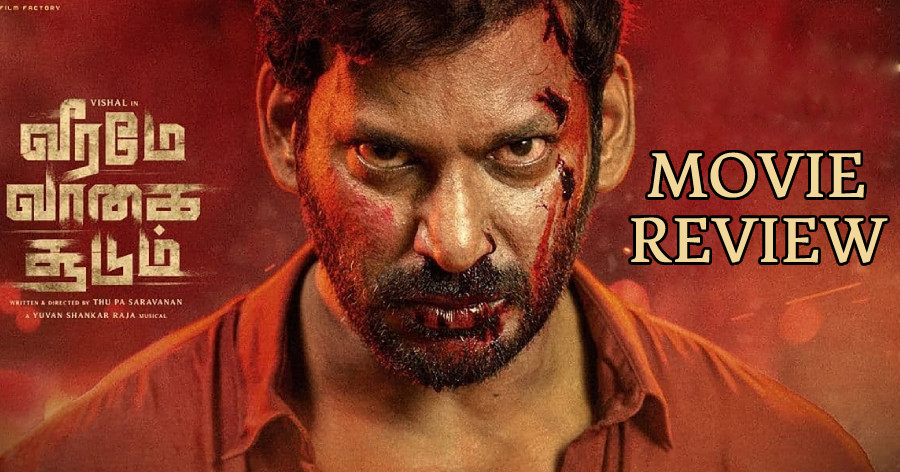 STORY:
Porus (Vishal) is aspiring to become a Police officer, hailing from a middle-class family. The fate of his family turns upside down in one night because of an influential factory owner (Baburaj) and the members of his clan. Porus decides to avenge the ones responsible for making his family's lives miserable and starts his mission. What was the end result of his fight against the odds? Well, you know the answer!

SCREENPLAY, DIALOGUES & DIRECTION:
Veeramae Vaagai Soodum is an underwhelming film, with regards to the writing and packaging. The story does not offer anything new or fresh, taking us through a path that we have already travelled. The predictability is one of the major concerns for this film. Right at the moment when we see Raveena's character facing a problem from a rowdy, you start predicting the scenes and you are never tricked or taken by surprise until the very end. The screenplay fails to keep us hooked because of its uninspiring writing and artificial performances.

Though there isn't anything novel about the story, Veeramae Vaagai Soodum could have captivated us with solid packaging. Unfortunately, that also goes for a toss. The heroine's character does not serve a single purpose and removing her out of the film wouldn't make a big difference. Oh! The badly written romantic in the initial few minutes add to the worry. The film is unnecessarily elongated and it definitely needs some trimming.

One of the fewer positives in the film is the pre-interval sequence which is quite effectively directed. There is a good level of drama happening there and it manages to hold our attention. One could just wish that the film had a lot more sequences of that mood in the second half.

CAST:
Vishal has delivered a fine performance and VVS is a zone that fits his body of work. Action has always been his forte and he excels in that aspect with this film as well. Raveena Ravi holds us with an emotional performance that is impressive, while Dimple Hayathi is wasted in a role that has no substance. Baburaj, the antagonist is okay as the typical villain that you would see in a commercial action drama. The performances of the rowdies and sidekicks are totally amateur and director Saravanan could have extracted better from the actors.

TECHNICAL:
Yuvan Shankar Raja's musical score adds good support to the movie and he has tried his best to make the film appeal better with his work. Kavin Raj's cinematography is solid with the right usage of colours to suit the mood of the film. Srikanth NB's scissors could have been used in a wiser fashion as we see several scenes that don't offer a purpose. The raw and gritty stunt choreography by Anl Arasu and Ravi Varma is splendid and it definitely needs appreciation.

SO?
Veeramae Vaagai Soodum is packed with solid action, but the content? Well, not so!

Verdict An uninteresting action drama that is predictable, long, and flat!