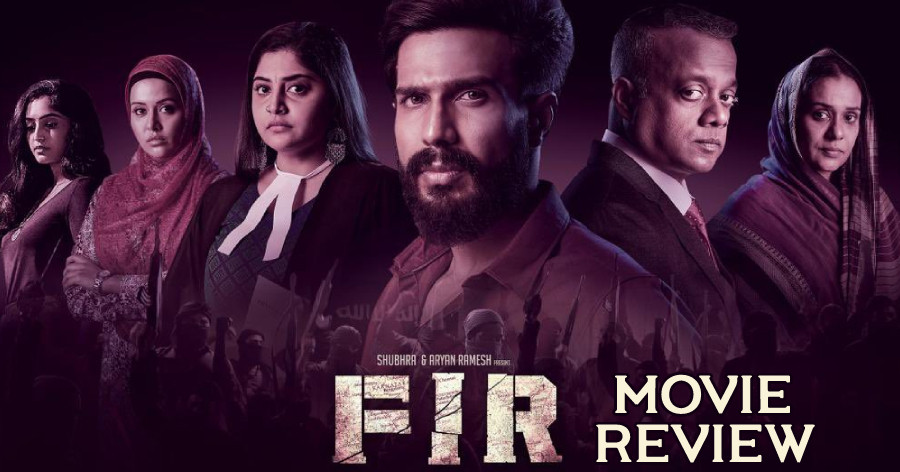 Vishnu Vishal, one of the most promising actors in Tamil cinema is back in the game with his next outing, FIR, directed by debutant Manu Anand. The film has Gautham Vasudev Menon, Raiza Wilson, Manjima Mohan, Reba Monica John, and others in pivotal roles.

STORY:
Can a name change the life of a man upside down? Yes, says FIR. The film follows the story of Irfan Ahmed (Vishnu Vishal), a Chemical Engineer, who is falsely accused of being an ISIS terrorist named Abu Bakkar Abdullah, responsible for executing fatal terrorist attacks in Colombo and Hyderabad. Since Irfan Ahmed is a Muslim, the National Investigation Agency (NIA) arrive at a decision that he is the terrorist that they have been searching for. Is Irfan Ahmed a terrorist indeed? Or is he an innocent youth? If so, how does he prove his genuineness? The film answers these questions.

SCREENPLAY, DIALOGUES & DIRECTION:
Debut director Manu Anand presents a film that is stylish and racy for the most part with an engaging screenplay. Manu gradually builds the tension in an organic fashion and so when Irfan Ahmed gets arrested by the NIA and Police, we feel the pressure. The sequence of events that lead to the arrest of Irfan is effectively shot and put together, and there are many such scenes that keep you engaged. The writing is definitely good, especially the dialogues. The lines that highlight the problems faced by Muslims are noteworthy and they are sure to be related by the masses. FIR has an important message that is effectively showcased and is one of the promising takeaways of the movie.

On the flip side, the revelation scenes towards the end lack credibility, and it kind of raises a question about the necessity of the police brutality that we saw earlier in the film. If the reasoning part was convincingly written and pulled off, it would've made the film look complete. As a result of which, we begin to question the logic behind several scenes. The second half feels rushed and we are made to process a lot of information in a short span of time. The mother sentiment angle also doesn't really strike a chord. The romantic moments with Reba Monica look to be an unnecessary diversion when the film is progressing at a brisk pace with its core premise.

Despite all these shortcomings, FIR is a racy action thriller that holds your attention for the most part because of its highly engaging screenplay.

CAST:
Vishnu Vishal pulls off a highly impressive performance showcasing the emotions in an impactful manner. He is earnest in the role of Irfan Ahmed and scores well in the action scenes as well, fitting the bill neatly. Gautham Vasudev Menon is given a stylish outlook and his performance is apt for the role. Among the three leads, Raiza Wilson stands out with a striking performance, putting up a confident front. Manjima Mohan is equally good in a neatly written role, while Reba is fine. The rest of the cast doesn't really lend solid support and some of the performances look artificial.

TECHNICAL:
Ashwath's background music is dynamic, adding to the tension and thus elevating the impact of several scenes. The songs are passable. Arul Vincent's cinematography gives a stylish perspective to the film and he does commendable work. GK Prasanna's fast-paced cuts aid the director's vision effectively. Due credits to stunt choreographer Stunt Silva for the raw and intense action sequences.

SO?
In a nutshell, FIR can be termed as an engaging action drama that carries an important message.

Verdict Despite some misses, FIR is a racy action thriller that holds our attention for the most part!

FIR movie release banned in these 3 countries - KNOW WHY?

Know what is the meaning of the first line of 'Arabic Kuthu' song in 'Thalapathy' Vijay's Beast? Check out!