Bigg Boss Tamil season 5 will begin soon when it premieres on Vijay Television on October 3 at 6 p.m., with the hit reality show being hosted by 'Ulaganayagan' Kamal Haasan for the fifth consecutive time also set to stream on DisneyPlus Hotstar. Promotions are already underway in top gear by Vijay TV as new promos are being released on a daily basis and social media is abuzz with the talk about the show. With all sights currently set on the new batch of contestants entering the Bigg Boss 5 house, popular Tamil serial and film actress Suzane George has now issued a statement regarding her participation on the show.

For a while now, there were strong speculations doing the rounds that Suzane George would be appearing on Bigg Boss Tamil season 5 as one of the contestants after she recently posted a picture that seemingly hinted at her participation. However, Suzane, who is best known for her appearances on Vijay TV serials like Saravanan Meenatchi and Office, cleared the air by issuing a clarification and confirming that she will not be participating in Bigg Boss 5. Suzane, who has starred in films like Mynaa and Ratsasan, posted an Instagram Story and wrote, "I am not going to #BB5Tamil. So overwhelmed with all the love I have been receiving till now. So yes...it is a no. A firm no." Check out her statement below: 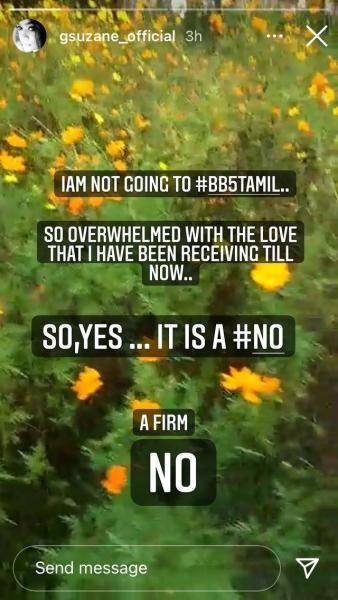 So far, many notable film and television industry personalities' names, including popular YouTubers have been speculated to be taking part in Bigg Boss Tamil season 5, with the official contestants list set to be revealed when the show gets launched this Sunday. Bigg Boss 5 is expected to pack in just as much entertainment and drama as the previous editions and the wait now begins for the show to kick-off.