Lady Superstar Nayanthara and director Vignesh Shivan are in a relationship and the duo has been in love with each other for the past few years. Vignesh has been very open about their relationship and the couple's romantic pictures have always set the Internet on fire. Recently, Vignesh Shivan interacted with his followers and fans on Instagram through a Q/A session in which he answered several interesting questions. One of the fans asked him about his wedding plans with Nayanthara, adding that he is eagerly waiting for the good news. Replying to that, Vignesh said that they are saving money for the grand wedding and also cited the Covid 19 situation as the other reason.

Vignesh's reply read, "Romba Selavu Aagum bro marriage & all.... So saving money for marriage and waiting for Corona to go away". This reply from Vignesh Shivan has garnered the attention of the netizens who were waiting to hear about Nayanthara's wedding. On the professional front, Nayanthara has several exciting projects in her lineup including Superstar Rajinikanth's Annaatthe. Her next release in Tamil cinema will be Netrikann which is currently in the post-production stages. Reports suggest that Netrikann could go for a direct OTT release on Disney + Hotstar.

Vignesh Shivan, on the other hand, is busy with his next directorial film, Kaathuvakula Rendu Kaadhal, which is nearing completion. Just a few more days of shooting is left and the makers are expected to wrap up the film by next month. Kaathuvakula Rendu Kaadhal features Makkal Selvan Vijay Sethupathi, Nayanthara, and Samantha in the lead roles and has music composed by Anirudh Ravichander. Vignesh Shivan and Nayanthara have also turned producers and they have three films lined up for release.

Netrikann is the first film, followed by Vasanth Ravi's Rocky and the critically acclaimed drama, Koozhangal. Rocky is expected to be released in theatres, while Koozhangal's release plans are yet to be known. For now, check out Vignesh Shivan's latest trending reply about his wedding with Nayanthara here: 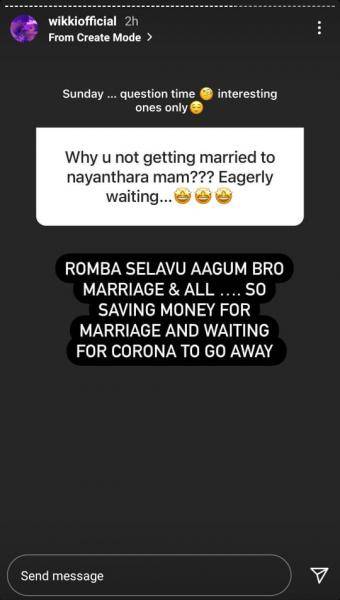 Popular actor stopped by airport officials for wearing only a bathrobe - VIRAL VIDEOS!