Actress Vidyu Raman gets married in an intimate wedding ceremony - wishes pour in!

Popular Tamil actress Vidyullekha Raman has carved a niche for herself over the years in the South Indian film industry ever since her debut in the Jiiva and Samantha-starrer, Neethane En Ponvasantham, under Gautham Menon's direction. Having since then appeared in Telugu and Kannada films as well, Vidyu Raman, who got engaged to fitness and nutrition expert Sanjay Watwani last year, recently tied the knot in an intimate wedding ceremony, which was attended by family members and close friends.

Vidyullekha recently surprised fans after her physical transformation, which she accomplished based on a strict diet and workout regime, with her photos receiving a staggering response from fans. Last month, the actress received congratulatory messages after she was seen in her slim avatar whilst enjoying the swimming pool with her close friends and family members during her bachelorette party and bridal shower. Vidyu Raman, who is incidentally director Selvaraghavan's wife Gitanjali’s cousin, was seen having fun with her, with the photos going viral on social media. Similarly, Gitanjali Selvaraghavan has now taken to her Instagram to share pictures from the Vidyullekha-Sanjay wedding haldi function, with wishes pouring in for the newly-married couple. 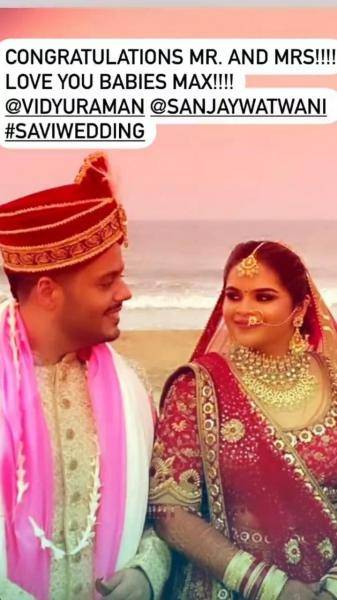 Last year, Vidyu had told in an interview to a daily that she met Sanjay on a dating app and said, "I hate dating apps. Putting up photographs on them didn’t really appeal to me. But my close friends asked me to try one. I met Sanjay through this dating app and we both swiped right on each other. But once I started chatting with him, it felt like I’d known him for years."