The dubbing works of Sivakarthikeyan's Don began last week and we had updated you about it. With that said, the latest update is that Cook with Comali sensation Sivaangi has started to dub for her portions in the movie. Sivaangi, who impressed one and all with her adorable cuteness and innocence in Vijay TV's Cook with Comali show, will be seen playing an important role in Don and this film is expected to give her a good breakthrough as an actor. Sivaangi took to her official Instagram page to share the update on her dubbing process by posting a picture from the dubbing suite. This development has come as a delight for the fans.

The shooting of Don is almost complete and only a minor portion is left to be shot. Don is directed by debutant Cibi Chakaravarthi, a former associate of director Atlee who worked in films like Theri and Mersal. Produced by Lyca Productions in association with Sivakarthikeyan Productions, Don has music composed by rockstar Anirudh Ravichander and the young composer's songs are expected to strike a chord with the youth audience. KM Bhaskaran of Kannum Kannum Kollaiyadithaal fame has handled the cinematography.

Doctor fame Priyanka Arul Mohan will be seen playing the female lead, while SJ Suryah will play the antagonist. Soori, Munishkanth, Bala Saravanan, RJ Vijay, and others form the supporting cast. Don is definitely a fresh film in terms of the casting and it is expected to showcase Sivakarthikeyan in a character that is filled with fun and charm. Sivakarthikeyan will be seen playing the role of a college student in Don. The first look poster of Don is expected to release soon as the photoshoot was completed recently.

Meanwhile, Sivakarthikeyan is all geared up for the release of his next film, Doctor, which is scheduled to hit the screens on October 9. Doctor is directed by Nelson Dilipkumar, who is currently working with Thalapathy Vijay on Beast. For now, check out Sivaangi's latest update on Sivakarthikeyan's Don here: 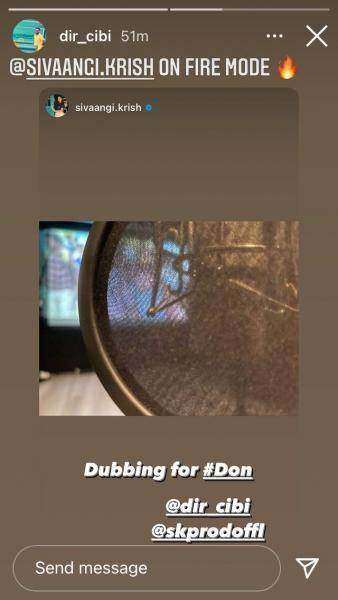