Four seasons of Bigg Boss Tamil have been successfully completed and the preparatory works for the fifth season are happening in full swing. While Aarav became the title winner of the first season, Riythvika and Mugen Rao emerged as the winner of the second and third season respectively. The fourth season of Bigg Boss happened amidst the Covid 19 situation and it turned out to be a big hit among the masses. Actor Aari Arujunan was declared the title winner of the fourth edition and he earned a huge fan base through the show. The makers of the show are busily planning the fifth edition which is expected to go on floors in the next few months.

Several popular names are rumoured to be a part of the fifth season, but only close to the beginning of the show, we will get a confirmed list of the names. Actress Shakeela's daughter, Mila was also one of the names who is said to be in the probable list of Bigg Boss: Tamil Season 5. In a recent Q/A session with her followers, Mila opened up about her Bigg Boss stint. When one of the fans asked Mila if there is any truth to the news about her participating in Bigg Boss, she replied, "Fingers crossed".

Mila has neither denied nor confirmed the speculation but has stated that she is keeping her fingers crossed. This means that the process is definitely initiated and it looks like we will have to wait for a few more weeks to get better clarity. It would definitely be exciting to see Mila in the Bigg Boss house and the young talent's reply has already garnered the attention of the netizens. Mila had taken part in one of the episodes of Cook with Comali 2, along with Shakeela and she managed to leave a good impression among the audience. For now, check out Mila's official statement about the Bigg Boss 5 rumours here: 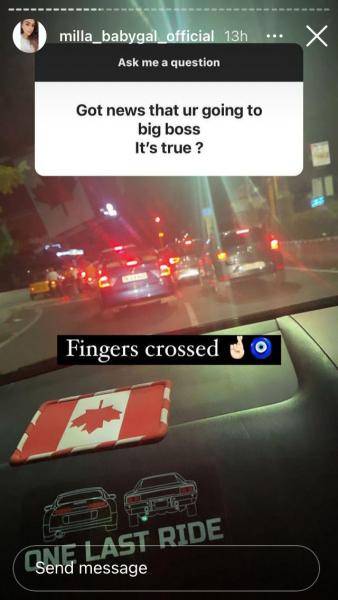