As everyone is aware, director Atlee's next film will star Bollywood Superstar Shah Rukh Khan in the lead role and the film has got huge expectations among the fans. The film will mark Atlee's debut in Hindi cinema and it is going to be exciting to see what the blockbuster filmmaker has in store for the audience this time. The film will feature Lady Superstar Nayanthara as the female lead, while Sanya Malhotra, Sunil Grover, Priyamani, Yogi Babu, and others form the supporting cast. The film will be bankrolled by Shah Rukh Khan's home banner, Red Chillies Entertainment. The shooting of the film kickstarted towards the end of August and the filming process is currently underway in Pune with SRK and others.

The letter carries the details of the project, including the title of the film, which is mentioned as Lion. Though this letter is a month old, it has just surfaced on social media, grabbing the attention of the fans. The shoot of the film took place at Sant Tukaram Nagar Metro Station (Pune) from August 27 to September 7. It is said that Lion is the working title of the film and the makers are yet to lock the final title. However, quite an interesting development, right? Well, let us keep our fingers crossed and wait for further updates. 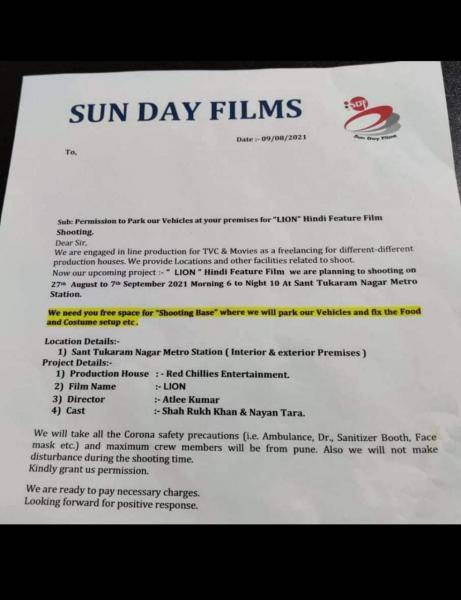 OFFICIAL: Don't Breathe 2 to get a wide release across India in four languages