Actor turned filmmaker Prabhu Deva has been on a signing spree of late and will next be seen in the much-awaited My Dear Bootham under Manjapai and Kadamban fame N. Raghavan's direction. Touted to be a fun-filled family entertainer, the upcoming film has Prabhu Deva playing the role of a genie, with the film produced by Ramesh P Pillai's Abhishek Films banner also starring Remya Nambeesan as the female lead. On Thursday, the My Dear Bootham motion poster was released showing Prabhu Deva as a genie in superhero attire, with the team also unveiling a still from the film featuring popular child artiste Ashwanth Ashokkumar of Super Deluxe fame. 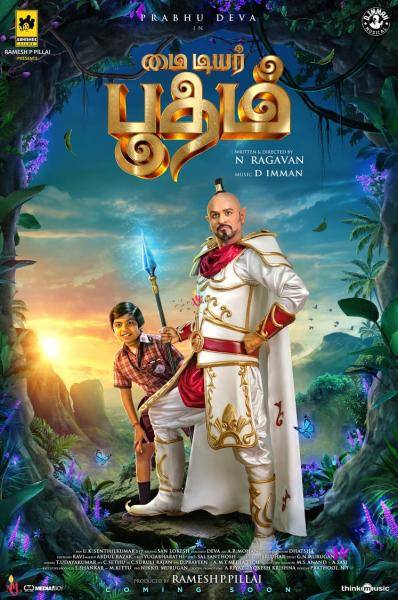 Prabhu Deva in the My Dear Bootham motion poster bears a resemblance to iconic Tamil actor Javar Seetharaman, who as well played the role of a genie in the 1967 blockbuster Pattanathil Bhootham. The first glimpse from the new film teases fans that there will be plenty of fun for audiences of all ages. My Dear Bootham's star cast also includes popular model-actress Samyuktha Shanmughanathan of Bigg Boss Tamil season 4 in a pivotal role and will be her next after she made an appearance in 'Makkal Selvan' Vijay Sethupathi's Tughlaq Durbar.

Prabhu Deva's My Dear Bootham has a stellar technical team on board starting with chart-buster composer D. Imman, who will no doubt prove to be a big strength for the film, followed by cinematographer U. K. Senthil Kumar and editor San Lokesh. The film also includes A.R. Mohan as the art director, Deva for the dialogues, Yugabharathi penning the lyrics, Sridhar taking care of the choreography and G.N. Murugan taking care of the stunt sequences.