TV actress Ankita Lokhande suffered a major setback on Tuesday night (December 7) when she got hospitalized after spraining her leg ahead of her wedding to boyfriend Vicky Jain, which according to reports is scheduled to take place this month. According to Pinkvilla, the actress has been discharged and advised bed rest by the doctors. Ankita took to social media on Wednesday to share a photo of her injury with her foot in a cast. Sharing the picture on her Instagram Story, the actress wrote, "Talk to my foot", with fans sending in their wishes for a speedy recovery. Below is Ankita's Insta Story: 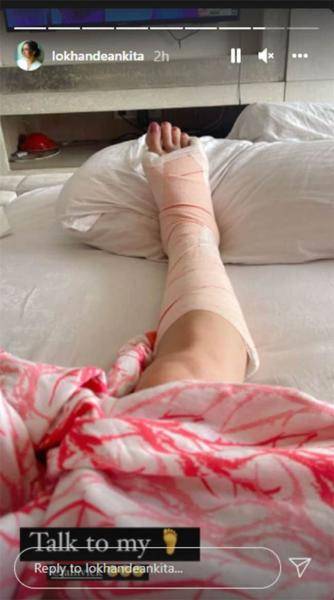 Ankita had previously shared photos from her pre-wedding ceremony last week, which took social media by storm. She wrote on the post, "Sacred" while adding the hashtags #AnVikikahani and #preweddingfestivities to her post. The actress had recently also hosted a bachelorette party, which saw many of the couple's friends join in on the celebrations among whom included Amruta Khanvilkar, Mrunal Thakur, Rashami Desai, Srishty Rode and many others.

Ankita Lokhande garnered immense popularity after playing the role of Archana in the smash hit television show Pavitra Rishta, which saw her being cast opposite late Bollywood actor Sushant Singh Rajput. They were in a relationship for six years before they split in 2016. Outside of her work on Pavitra Rishta, Ankita has also made appearances on shows like Ek Thhi Naayka and Shakti - Astitva Ke Ehsaas Ki. Ankita is currently starring in the second season of Pavitra Rishta and is this time sharing screen space with Shaheer Sheikh, who has stepped in as Sushant Singh Rajput's replacement.

Apart from her work in the Hindi television industry, Ankita made her Bollywood debut in the 2019 Kangana Ranaut-starrer Manikarnika: The Queen Of Jhansi. She has also appeared in Tiger Shroff's Baaghi 3, while also participating as a contestant on TV reality shows like Jhalak Dikhhla Jaa and Comedy Circus.