A number of promising films are in development in 2021 and one among them is the upcoming suspense thriller, Marechan, being produced and presented by Ravi Pachamoothoo. Directed by Vinod Vijayan, the film stars Sai Raam Shankar in the lead role as the character Sidharth Neelakanta, a public prosecutor, who fights child abuse, but ends up getting involved in four murders mysteriously, while also suffering from personal trauma. The rest of the plot of Marechan revolves around how Sidharth goes on to prove his innocence and emerge triumphant in his battle.

Apart from directing, Marechan's story, screenplay and dialogues have been written by Vinod Vijayan, with the additional cast featuring names like Shruthi Sodhi, Ashima Narwal, Samuthirakani, Kalabhavan Mani, Sudhakar, Sujith Shankar, Shiva, Jolly, Ramshad, Pallavi Gouda, Bhanushri and Kalapalatha in major supporting roles. Ravi Pachamoothoo who happens to be SRM University chairman, Vinod Vijayan and Garlapati Ramesh, has planned to release Marechan simultaneously Tamil, Telugu, and Kannada languages. Rahul Raj of Oh My Friend is composing music for the film, while Gopi Sundar is doing the background score. Cinematography has been carried out by Rajeev Ravi, Suresh Rajan, Vinod Illampally and Pappu, with Karthik Jogesh handling the editing, Santhosh Raman in charge of the production design and Radhakrishnan for the sound design. Likewise, Patanam Rasheed are Patanam Shah overseeing the make-up, with costume design by Mashar Hamsa and Melvin and Sid Sriram and Madhu Balakrishnan on board as the singers.

An interesting aspect about Marechan is that the makers have roped in six National Award winners among whom include cinematographer Rajeev Ravi, music director Gopi Sundar, art director Santhosh Raman, make-up artist Patanam Rasheed and sound designer Radhakrishnan. Their additions to Marechan will no doubt bolster the value of the film and also be a big USP for the makers to draw more audiences when the film nears its release. Check out below the Marechan official poster: 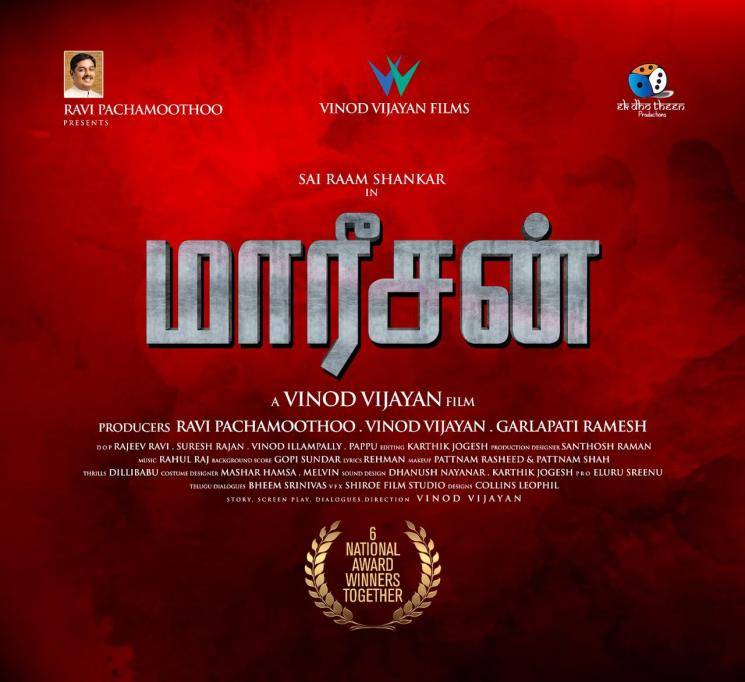