Sivaangi is one of the most popular and celebrated personalities from the television industry and her growth has been phenomenal in the last few months. Sivaangi was one of the finalists of Super Singer: Season 7 which was aired on Vijay TV. However, she got a massive breakthrough after making her appearance in Cook with Comali show. Things got even better in the second season of the show where she was mostly paired with Ashwin. The pairing of Ashwin and Sivaangi was widely loved by the Tamil audience and the duo was adorably called as 'Ashaangi', by the fans. Ashwin and Sivaangi were paired together 9 times in the show.

Additionally, Sivaangi also had a beautiful rapport with Pugazh and the duo's sibling relationship also had a special fan following. Sivaangi was considered to be the dearest pet for all of them who were a part of Cook with Comali, show. The show came to an end, a few days before and Kani Thiru was declared as the winner.

Earlier today (April 24), Sivaangi took to her official Instagram page to share an important life update and it has been garnering attention on social media. Sivaangi's college life comes to an end today and she shared her thoughts about it on Instagram. Sivaangi is a student of B.Com Honours from MOP Vaishnav College in Chennai. Sharing the picture of a paper that carried the details of her course, Sivaangi wrote, "Last day of my UG". Sivaangi sounded very emotional in her post which has now gone viral among the fans. Meanwhile, the success of Cook with Comali has given Sivaangi the big opportunity to venture into films. She will kickstart her acting career with a biggie indeed.

As already known, Sivaangi's debut film in Tamil cinema will be the Sivakarthikeyan starrer Don, directed by debutant Cibi Chakaravarthi. Details regarding Sivaangi's character in the film are yet to be known, but it is believed that she will be seen in the role of a college student. The fans are eagerly looking forward to seeing Sivaangi perform alongside Sivakarthikeyan and the young talent couldn't have asked for a better launch pad. The shoot of Don is progressing at a brisk pace. Produced by Lyca Productions in association with Sivakarthikeyan Productions, the film has music scored by Anirudh Ravichander and has Priyanka Arul Mohan playing the female lead. For now, check out the screenshot of Sivaangi's latest college update here: 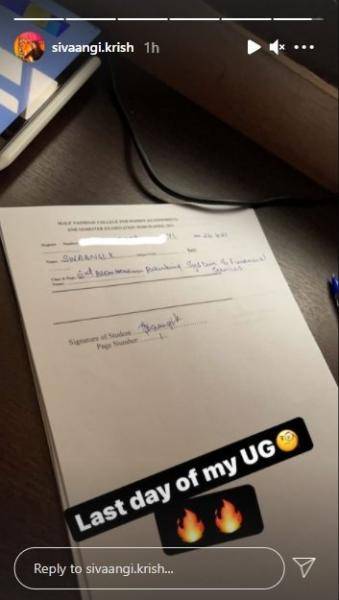 Athulya Ravi frustrated and angry because of THIS - Breaking Statement here!