Everyone is still trying to come to terms with the untimely death of Hindi television and film actor Sidharth Shukla, who passed away last week due to a heart attack. Social media has been filled with pictures and videos of the Bigg Boss 13 title winner, including fans sharing the memorable moments they shared with him over the years. With Sidharth's funeral taking place last week, the 40-year-old's family, who have been mourning his passing away, have now released a statement for the first time on Monday. The statement released is as follows: "Heartfelt gratitude to everyone who has been a part of Sidharth’s journey and showered him with unconditional love. It definitely doesn’t end here as he now resides in our hearts forever! Sidharth valued his privacy, hence we request you to allow our family the privacy to grieve. A special Thank You to the Mumbai Police force for their sensitivity and compassion. They have been like a shield, protecting us and standing by us every minute of the day! Please keep him in your thoughts and prayers. Om Shanti – The Shukla Family." 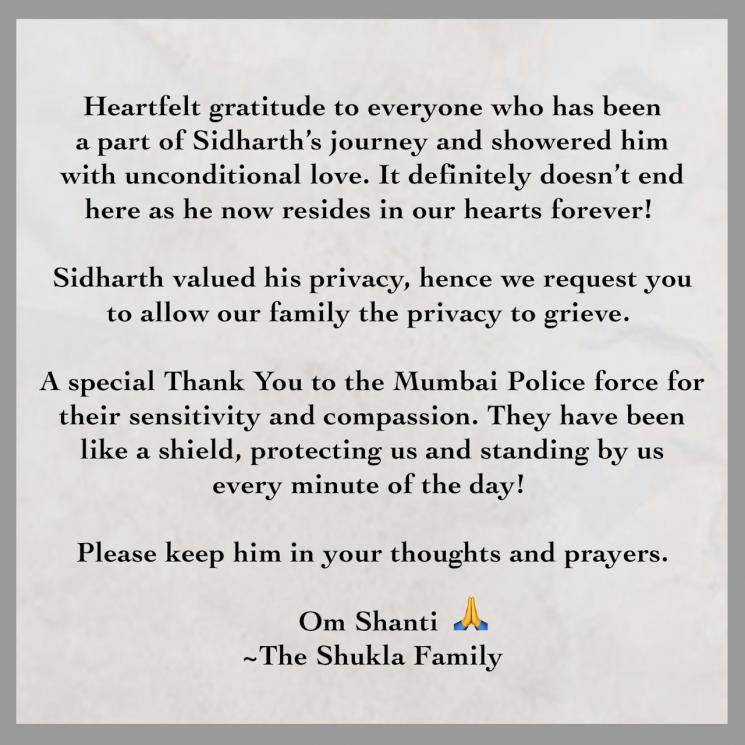 Sidharth Shukla was rushed to Cooper Hospital in Mumbai on September 2 after he suffered a massive heart attack. Unfortunately, the doctors declared him to be dead upon his arrival and was kept in the hospital overnight for an autopsy, with reports stating that he did not sustain any internal or external injuries. Celebrities and personalities from various walks of life expressed their condolences on social media, including many paying their last respects at his funeral last week.

Sidharth Shukla made his acting debut in 2008 on the popular TV show, Babul Ka Aangann Chootey Na, before landing a role on the serial, Balika Vadhu, which saw him play a character named Shivraj Shekhar. He gained a massive fan following after emerging as the winner on Fear Factor: Khatron Ke Khiladi 7, including Bigg Boss 13 in 2013, while also making an appearance and also serving as a host on Bigg Boss 14 last year.