'Thalapathy' Vijay's Master released as a grand Pongal treat in January this year continues to generate massive talk and debate among fans after its blockbuster box office success, including witnessing a staggering viewership on the Amazon Prime Video streaming platform. Directed by Lokesh Kanagaraj and produced under Xavier Britto's XB Film Creators banner in association with Lalit Kumar's 7 Screen Studios, Master also featured 'Makkal Selvan' Vijay Sethupathi as the antagonist, with his chemistry alongside Vijay turning out to be electrifying and one of the biggest USPs of the film, which also included chart-buster music by Anirudh Ravichander.

As the first half of 2021 has come to a close, leading global online film database IMDb (www.imdb.com) has now released data on the most popular Indian films and web series of the year so far. In their latest data, IMDb has stated that Vijay's Master has topped the list after it premiered on Amazon Prime on January 29, following its theatrical release on January 13. Apart from Vijay's Master, some other notable Indian films in the list include Mohanlal's Drishyam 2 in Malayalam, Dhanush's Karnan in Tamil and Pawan Kalyan's Vakeel Saab in Telugu.

According to IMDb's latest press release, the list is ascertained on IMDbPro data on the page views of IMDb users in India rather than determining them on the box office rankings or any statistics or reviews from film critics. IMDb's list of the most Indian films and shows of 2021 are as follows:

3. The White Tiger (streaming on Netflix) 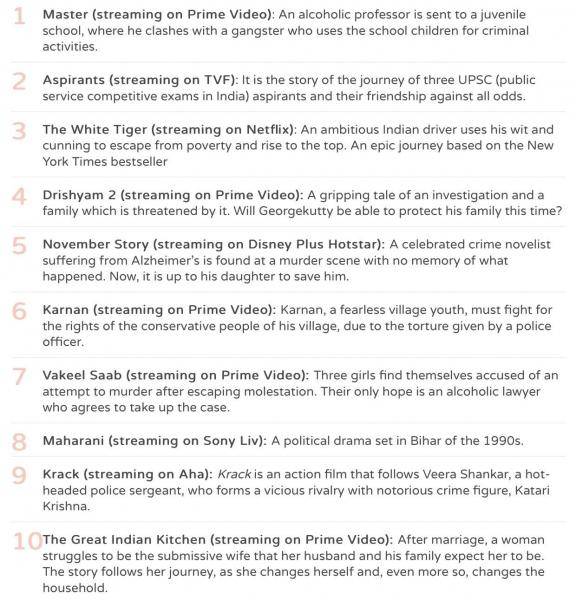 Watch the super hot and intriguing trailer of Taapsee's next film - Don't miss!