Much awaited marana mass vedi trailer of BIGIL - check out! 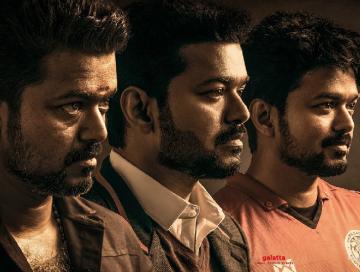 Thalapathy Vijay's Bigil, directed by Atlee and produced by Kalpathi S Aghoram's AGS Entertainment, is gearing up to hit the screens for Deepavali 2019. The film boasts of some big names in the star cast including Nayanthara, Jackie Shroff, Kathir, Vivekh, Yogi Babu, Daniel Balaji, Indhuja, Reba Monica John, Amritha Aiyer, Varsha Bollamma, Devadarshini, Indraja Shankar and others. The highly awaited trailer of this film has finally hit the digital media and the fans are on a rage mode. This strikingly cut trailer gives us the glimpse of what we can expect in the film on the festive day.

Thalapathy Vijay, as always, looks charismatic and locks the audience with his fantastic screen presence, this time with two different makeovers. Nayanthara as Angel plays Vijay's love interest and we see a glimpse of her as well. The trailer has a mix of all the emotions and conveys the mood of the film in the right manner. Bigil will be an entertaining sports revenge drama with an underlying theme of women empowerment. A.R.Rahman's background score and G.K.Vishnu's visuals take the trailer to the next level with their beautiful work.

It looks like Vishnu's work in this film will be highly talked about after the release as the football scenes look very neatly shot. Editor Ruben who is known for delivering power packed teasers and trailers makes no mistake with Bigil as well. This trailer is all set to break the existing records and create some new ones. The trailer has been released on the official YouTube channel of Sony Music South who owns the film's audio rights. Check out the magnificent trailer of Bigil here: