Sivaangi makes an important clarification - asks fans to REPORT THIS!

Sivaangi who took part in the seventh season of Super Singer (on Vijay TV), is now a common household name in Tamil Nadu, thanks to the massive success of her presence in Cook with Comali. Sivaangi participated in the inaugural season of Cook with Comali and she earned a solid fan base through the show. The fan following only increased with the second season and things only got better after she paired with Ashwin, who is one of the contestants. Ashwin and Sivaangi turned out to be one of the most loved pairs in Cook with Comali and the duo share a sweet friendship that has looked heartwarming and cute on-screen. She also shares a sweet brotherly relationship with Pugazh, who is another sensation of the show.

Not only Ashwin and Pugazh, but Sivaangi has also managed to strike a beautiful rapport with all the other contestants and comalis in the show and she is indeed one of the most loved personalities. Sivaangi has risen to be one of the sensational talents in the recent years and we are sure that things are just going to get better and better in the coming years.

Meanwhile, the young talent took to her official Instagram page to share an important message to her followers and well-wishers. Sivaangi shared a screenshot of a Twitter profile with her name and called it to be fake. She also clarified that she is not available on Twitter platform and asked people not to believe in fake tweets. Sivaangi's fake Twitter profile account had a tweet that read, "#GoBackModi", (relating to Modi's visit to Chennai today morning) and the tweet had got a huge reception. There were more than 3000 retweets and 10000 likes to that tweet and it looks like many people were misguided by the name.

Sivaangi will be making her first-ever silver screen appearance with Sivakarthikeyan's next film, Don which was officially launched recently. Sivaangi will be seen in an important role in this youthful comedy entertainer, that is directed by debutant Cibi Chakaravarthi. The success of Cook with Comali has given Sivaangi this big opportunity and she is expected to bag a few more exciting projects as well. For now, check out the screenshot of Sivaangi's clarification regarding the fake Twitter account here: 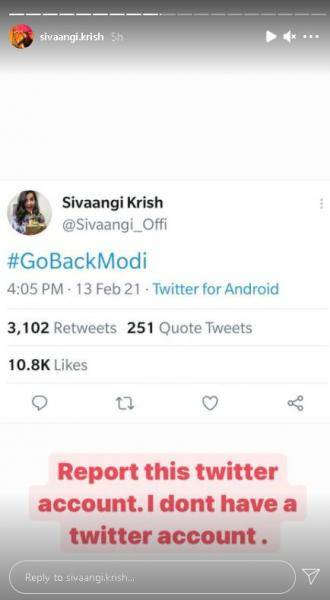