Bigg Boss Tamil season 4 came to a grand conclusion a week back, with Aari Arujunan being declared as the winner, followed by Balaji Murugadoss announced as the first runner up, Rio Raj coming in as the second runner up, Ramya Pandian revealed to be the third runner up and Som Shekar finishing as the fourth runner up. Hosted once again by 'Ulaganayagan' Kamal Haasan, the recent edition of the hit reality TV show, which was telecast for more than three months on Vijay TV, including being streamed on Hotstar, saw record viewership. Among the sixteen contestants to enter Bigg Boss 4, popular Tamil news reader Anitha Sampath went on to become a widely-debated contestant after her stint on the show.

An outspoken personality in Bigg Boss Tamil season 4 and in real life, Anitha Sampath has often taken to social media to convey her views on several topics and issues. Now, she has spoken about what each of the contestants on Bigg Boss 4, especially the female participants are undergoing in the form of trolling even after the show has come to an end. Anitha wrote on her Instagram Story and reminded trollers on social media that Bigg Boss is just a game and that the show is now over. She then said that it is a stressful environment for 18 people with different mindsets to stay locked up together at the same place and without any contact with the outside world, which does not usually happen while one is at home.

Anitha further pointed out the difference to viewers that Bigg Boss was not a show like Cooku With Comali (also airing on Vijay TV) where all the contestants have a fun time with each other. She also said that the Bigg Boss contestants during and after the show have corrected their mistakes and will change for good. She concluded her statement by requesting fans to let the female contestants lead a peaceful life. Below is the screenshot of her Instagram Story: 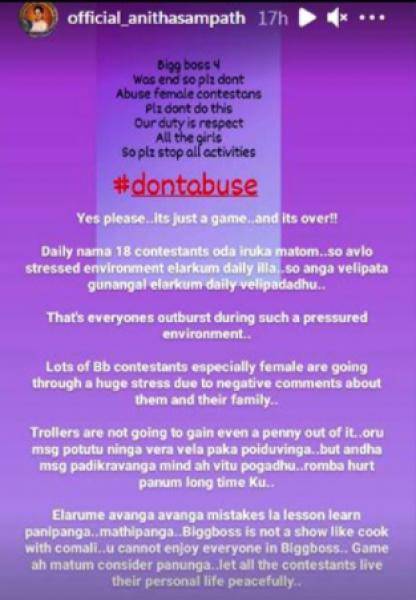 6 Indian cricketers to be gifted Mahindra SUV after Australia success!