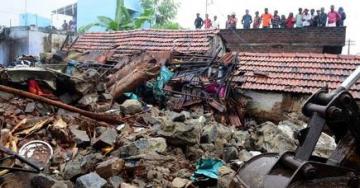 The owner of the compound where a 20-foot-tall compound wall collapsed onto a hutment killing 17 people approached the Madras High court seeking bail. The man, who is the prime accused in the case has been under judicial custody for the past 5 days and is being held at the Coimbatore Central Prison. On December 3, the compound wall of a palatial house in the Nadoor of Mettupalayam had collapsed onto 4 hutments in the adjacent Adi Dravidar colony, killing the occupants who were sleeping inside. The villagers had accused that the owner of the compound had used stone blocks to raised the wall to a whopping 20 feet, allegedly to avoid seeing or dealing with the occupants of the hutment, who were all from a lower caste. The Dalits had repeatedly approached the local officials trying to prevent the wall's height being increased alarmingly. Even the walls of the Vellore prison, the biggest in the state, used to be only 15 ft high until a couple of years ago.

The incident had sparked high outrage and the owner of the plot - S Sivasubramanian - went into hiding. He was picked up by the Mettupalayam Police a day after the mishap. Advocate V Ragavachari, representing Sivasubramanian, pointed out that the accused, who is a known textile businessman in Coimbatore, was not a flight risk. He would cooperate with any investigation and have not voluntarily caused hurt, said the plea. The petitioner had only sought to build a compound wall and had not intended any hurt, said the petition, which also urged the court to consider the accused's heart condition.

The Bench decided to adjourn the hearing to Wednesday after the prosecution challenged the bail plea and sought time to submit its objections. Subramaniam is booked under IPC section 304(2) for culpable homicide not amounting to murder and Section 3 of Tamil Nadu Public Property (prevention of damage/loss) Act. If convicted, he could be slapped with a fine and imprisoned for up to 10 years.