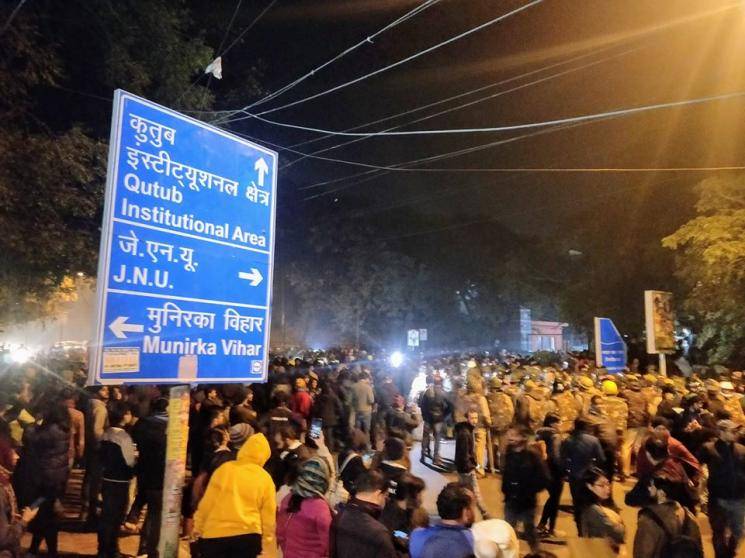 Delhi: After the unprecedented attack on the students of the Jawaharlal Nehru University (JNU), horrifying accounts of the injuries are coming to light.

Horror at JNU last night - i Had to escape the vulture mob attacked me and my Cameraman of outsiders right outside the main gate of JNU.
Someone somehow recorded it. pic.twitter.com/Z076wS8Fao

One of the faculty to be rushed to the AIIMS trauma centre with a severe head injury, Ms Sucharitha Sen has been the face of the havoc, beside the JNUSU president Aishe Gosh.

"Most of them were masked, and armed with hockey sticks and lathis. They threw stones of all sizes and I was hit on my shoulder," Ms Sucharitha Sen told NDTV. "Then one of them hit me on the head with a stone about the size of half a brick." The lady also stated that she was afraid of returning to the campus, which has become almost home over years.

According to a release from the AIIMS, “Eighteen people from JNU have come to AIIMS Trauma Centre with bleeding in the head and abrasions among others. Investigations are underway”. They also said that JNU Students’ Union (JNUSU) president Aishe Ghosh has got lacerations on her forehead and is undergoing investigations. The student leader had spoken to the media, bleeding profusely, before being taken to the trauma centre.

Aishe Gosh, who is reportedly in a critical condition, was filmed with her head bleeding profusely. "I have been attacked brutually," the girl says in a video showing the top of the head congealed with blood and still bleeding.

According to the Delhi government officials, seven ambulances were sent to the JNU and 10 more are on standby.

What we see in JNU tonight gives away a signal: now the fact that RSS’s oldest militia—ABVP—is put to work to attack oppositional voices, the “model” can get escalated. I’m afraid, the same strategy could be expected in other places too. I hope 2020s India won’t be 1920s Italy. pic.twitter.com/CsHl2eWtsw

Members of the media, who were covering the incident at the university gate, were also reportedly abused by the attackers. A reporter from India Today was stopped from recording his live piece-to-camera and the reporter from Scroll stated that he was heckled for recording the scenes outside the gate. The journalist also reported of being called 'jihadi' and 'naxalwadi' and being abused for being 'against the nation'.

For friends and well wishers concerned about my well being after tonight's assaults:

My eye miraculously survived the kick. Only a bruise.
Lower back soft tissue injury, but no fracture. Doc says rest for 3-4 days should do.

Back home from AIIMS, where I was treated very well.

Swaraj Abhiyan chief Yogendra Yadav, who arrived to take stock of the situation in the evening, was attacked for giving a media byte while the Delhi police allegedly stood by. There also has been allegations that the ABVP cadres had attacked those who had come in with them when the students began running away rather without fighting back.