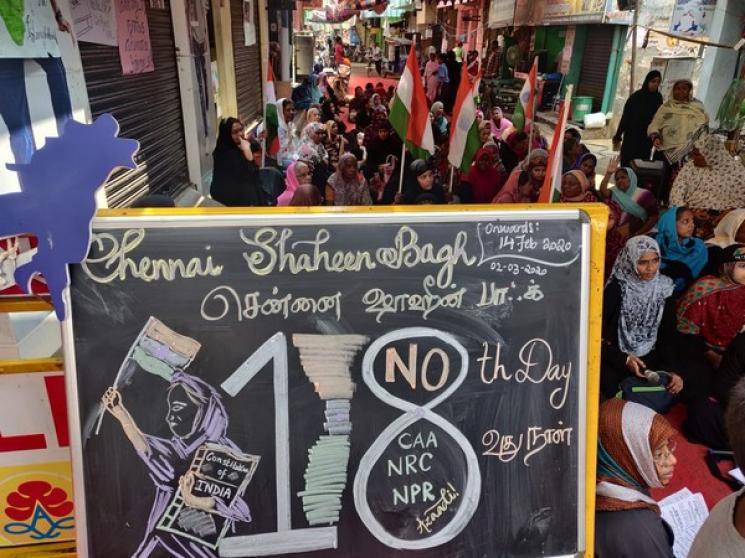 Chennai: Though the Greater Chennai city police have repeatedly approached the court and renewed a ban on all 'gatherings without permission' since December last, the protests in Chennai have been going strong for the past 18 days.

According to sources, The Washermanpet area is becoming the Shaheen Bagh of Chennai, what with the women staying put for the past 18 days. Since the inception of protests, which the Tamil Nadu police tried to violently remove on the first day, women have been regulars at the protests sites, often with children. While many children join after school, a good amount of children have been on the protest site as the parents reportedly don't have alternative babysitting options.

Slogans of Aazadi, and speeches in Urdu are pretty common in Washermanpet: on Tuesday, an 84-year-old grandmother had given a firebrand speech reminding our prime minister of the legacy of Islam in India and saying why it was important to get the public voice heard.

As this was, Deccan Herald reported that senior Tamil Nadu ministers have gone to Delhi to meet Home Minister Amit Shah. Reportedly, Fisheries Minister D Jayakumar and Electricity Minister P Thangamani are in New Delhi with a letter written by Chief Minister Edappadi K Palaniswami. It was said that the state would try to seek exemption from NRC for now.

As this was, Kerala state has reported that it has not arrested anybody in connection with CAA protests. However, isolated protests have been made after protesters were abused by individuals supporting the controversial law. In Bengaluru, Bilal Bagh has seen a protest by women since February 8 and a case was registered after the graffiti "Free Kashmir" appeared on the walls of the army compound in Ulsuru.

The public in Hyderabad has been complaining of attempts to suppress protests even as the city gets ready for a massive rally by Amit Shah on March 15.