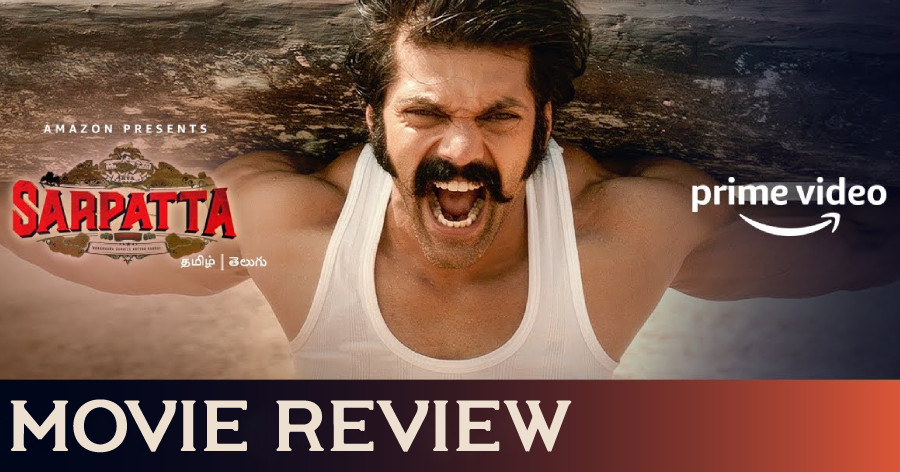 Arya's Sarpatta Parambarai, directed by Pa Ranjith, has released amidst solid hype and buzz among the film buffs and it is the next direct OTT release in Tamil cinema. Sarpatta Parambarai, which deals with the sport of boxing, is now streaming on Amazon Prime Video, and has fans excited ever since the people got to witness the epic transformation Arya went through for his character in the film. Does the film live up to its hype? Well, here you go!

STORY:
Sarpatta Parambarai, once an esteemed clan, full of champions, is now a completely hopeless team, that constantly loses to Idiyappa Parambarai, the traditional rival team. Kabilan (Arya) comes forward and expresses his interest to fight against Vembuli (John Kokken), the star fighter of Idiyappa Parambarai. Though initially ignored, Kabilan earns the support and trust of Rangan (Pasupathi), the coach of Sarpatta Parambarai, after winning a few local matches. From thereon, the entire film focusses on the final epic fight between Kabilan and Vembuli. Who won the epic finale and did Kabilan manage to safeguard the respect and pride of Sarpatta Parambarai is what the film is all about. Sarpatta Parambarai could be yet another underdog story of an overlooked character who beats the odds to become a winner in life, but it is the presentation and the screenplay that makes the film interesting.

SCREENPLAY, DIALOGUES & DIRECTION:
Director Pa Ranjith manages to set the stage in the first 20 minutes, keeping the audience hooked to their screens and there is no look back at all. The film does have a dip in the pace here and there, but on a larger picture, the packaging is neat. In a way, Sarpatta Parambarai stays true to its genre and that is where you get connected with the world created by Ranjith. There are no major deviations from the story. Even the political ideologies that Ranjith uses in his films go along with the story and nothing is unnecessarily added. Ranjith has also incorporated real-life controversial political incidents like MISA into the film and those sequences seamlessly create the conflict in the story.

The boxing sequences are the major highlight of Sarpatta and they have been neatly choreographed. Especially, the face-off between Kabilan and Dancing Rose is sure to keep you interested. Together, Thamizh Prabha and Ranjith have written a film that garners good attention through its characters and emotions. Kabilan, Vembuli, Vaathiyaar, Mariyamma, Daddy, Vetri, Raman, Dancing Rose, Duraikannu, Thaniga, all characters are interestingly designed and they keep us hooked in the world of Sarpatta. Director Pa Ranjith and his entire team need to be applauded for delivering an honest boxing-based film.

It has been a really long time since we saw one such boxing film. Sarpatta Parambarai will definitely be a crown for Pa Ranjith. One of the fewer concerns is that the sequences showcasing Arya's deviation seem to look hurried and it could have been better if the flow had been smoother there. Also, the film follows a tried and tested route, thereby becoming predictable for a majority.

CAST:
Arya is brilliant as Kabilan and this is definitely one of his top-class performances. Arya is an absolute delight to watch when he is inside the boxing ring. His physical fitness has definitely added more authenticity to the film. However, he looks a little lesser intense in some emotionally charged sequences. Pasupathy is an actor par excellence and he manages to fit into any given character. Pasupathy, as a mentor figure is highly impressive and it is a treat to watch him perform. John Kokken, as Vembuli, strikes well with the action moves. He doesn't have major scope to emote, but with actions, he scores full marks.

Dushara Vijayan, as Mariyamma, the female lead, is promising and it looks like Ranjith has spotted another talented actor. Dushara (as Mariyamma) emotes really well when she tries to strike a chord with her husband. Kalaiyarasan leaves a good impact with the limited scope that he gets. John Vijay, GM Sundar, Anupama Kumar, Thangadurai, and others play their part well. The casting equation is fantastic and due credits to Ranjith and team for picking the right set of actors. After you finish watching the film, it feels like all the actors have lived in their respective roles.

TECHNICAL:
Santhosh Narayanan's musical score is one of the biggest strengths of Sarpatta Parambarai. His powerful scores during the boxing matches elevate the energy to a different level. 'Neeye Oli' is great, both aurally and visually. Murali G's cinematography and Tha Ramalingam's production design supplement each other beautifully and together, both of them create the 70s - 80s feel quite well. Murali's staging and visual treatment are fantastic. Due credits to stunt choreographers Anbariv and boxing trainer Thiru for delivering a boxing based film that looked real and intense. Except for a few portions in the second half, Selva RK's edit looked smooth and apt.

SO?
Sarpatta Parambarai definitely deserves a watch and it will definitely make your weekend worth it. Watch it for the awe-inspiring dedication of Arya and the effective execution of Pa Ranjith.

Verdict: Sarpatta Parambarai is an engaging boxing drama that strikes gold with some finest performances!