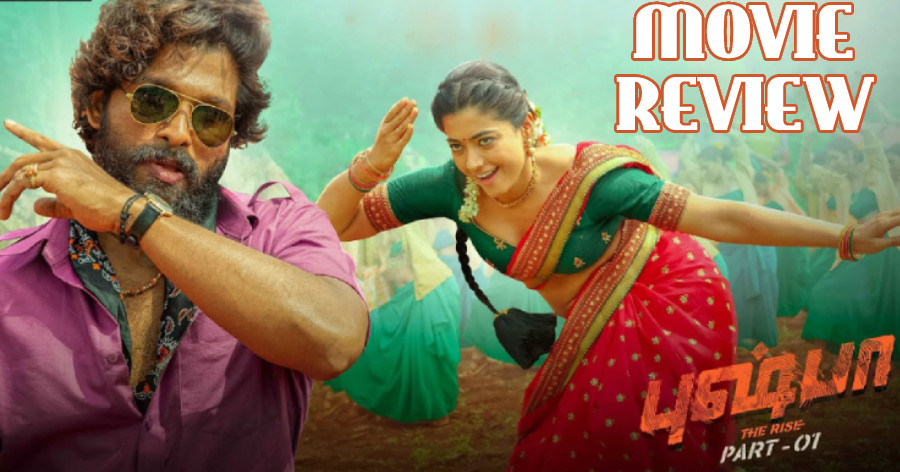 Allu Arjun's highly anticipated action drama, Pushpa, is out in theatres amidst huge expectations. With chartbuster hit songs and a power-packed trailer amplifying the audience's expectations, has Pushpa: The Rise lived up to its hype and buzz? Here you go!

STORY:
The film follows the story of Pushpa Raj (Allu Arjun) who is a carefree rogue desiring to rule the red sanders smuggling world. From being no one, he defeats every single odd that comes his way to reach the next level. Did Pushpa Raj succeed in his mission of becoming the King of the underworld red sanders smuggling forms the crux of Pushpa.

SCREENPLAY, DIALOGUES, & DIRECTION:
Director Sukumar garners attention with the way he has sketched the character of Pushpa Raj as it manages to hold the audience's attention. The first half of Pushpa is passable with a good mix of comedy, romance, and action. Especially, the comedy portions connect really well with the audiences. Director Sukumar needs to be applauded for executing a film of this scale and his determination is definitely noteworthy.

On the flip side, the problem with Pushpa is its inconsistency in the screenplay, mainly in the second half. Post the interval, the film moves at a wavered pace with a bunch of unnecessary scenes that make the film draggy.  The film takes forever to get to the point and a crispier version would've made things better. One more major issue that Pushpa: The Rise has is the lack of strong opposition. Neither Ajay Ghosh nor Sunil poses a strong fight as Allu Arjun easily gets past them. By the time, Fahadh Faasil enters the picture, it becomes a tad too late. The mother sentiment angle doesn't add any value to the movie and it just looks to be a commercial addition.  If Pushpa had a compelling screenplay with solid stretches to hold our attention, it would have turned out to be a massive entertainer.

CAST:
Allu Arjun is in blazing form as Pushpa and he delivers a cracker of a performance. It is a completely different makeover for the stylish actor whom we've been used to seeing in urban-centric roles. He is a delight to watch and he makes sure that the audiences are entertained and engaged with his body language and style. Be it the mass moments or the action scenes, Allu Arjun strikes gold and he definitely lifts up the film with his striking screen presence.

Rashmika Mandanna delivers a decent performance in a role that has templated writing. Rashmika's dance moves in Saami Saami song lightens up the mood of the fans! Sunil, Ajay Ghosh and Anasuya do their respective parts well, but their characters don't lend an impact. Fahadh Faasil who appears towards the end of the movie leaves his stamp and we will have to wait until the second part to see his full form. Samantha sizzles with her sexy dance moves in the highly talked about item dance number.

TECHNICAL:
Devi Sri Prasad's songs are enjoyable, but the background score isn't powerful enough. The visuals are commendable and they establish the landscape of the film effectively. A crispier version from Ruben could have made the film more solid. Due credits to the stunt choreography as it packs a good punch with rawness.

SO?
Pushpa has a decent first half and an average second half, but Allu Arjun's presence makes the film passable.

Verdict Pushpa is Allu Arjun's show all the way making us overlook the other drawbacks in the film!