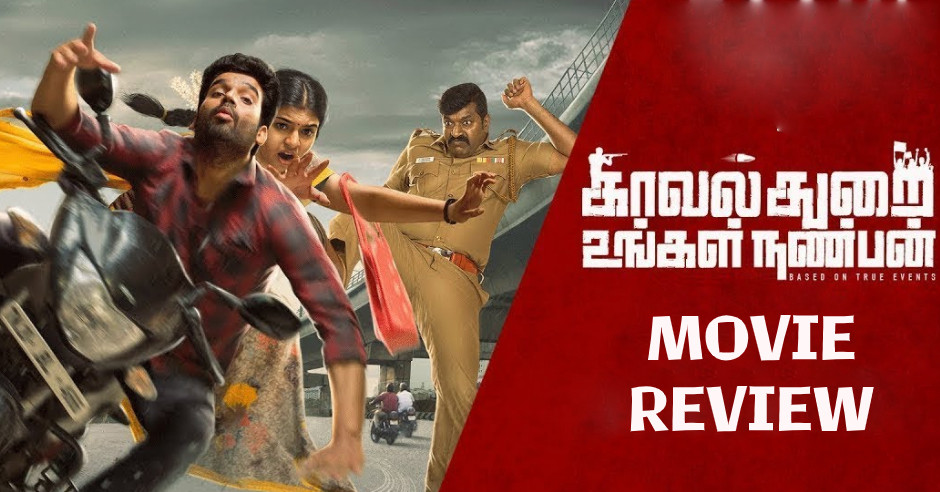 Kavalthurai Ungal Nanban sets a serious mood right from its opening, where we hear and see a man wailing in pain. The entire title credit sequence, aided by the wailing and the disturbing sound makes you prepared for the next 2 hours.

The story revolves around the life of Prabhu (Suresh Ravi), a middle-class man working as a food delivery boy, which becomes problematic after an incident with the Police. Prabhu lives with his wife Indhu (Raveena Ravi), who is the breadwinner of the family. One fine day, Prabhu and Indhu are stopped by the patrol police in the night and when Prabhu is confronted by Police Inspector Kannabiran (Mime Gopi),  he irks Prabhu and makes him lose his cool. As a result, Prabhu faces all the consequences and his future turns completely dark. The film depicts a brutally hard-hitting incident that talks about the abuse of power.

Kavalthurai Ungal Nanban creates an impact in many places and you feel empathetic towards the protagonist when he faces one problem after another, constantly. After setting up the characters in the initial few minutes, debut director RDM storms into the story and takes us into a darker world. The serious confrontation scenes between Prabhu and Kannabiran have been neatly shot and those scenes capture the emotions of both the characters.

As the film progresses and you get to see the visuals of the custodial violence, you cannot avoid recollecting the real-life Sathankulam incident that killed two innocent lives. The film sticks to realism in most places and that is what makes Kavalthurai Ungal Nanban quite relatable. Towards the end of the film, when you realise the tiring journey of Prabhu and Indhu, you feel sad and helpless. In many ways, KUN can be called the younger sibling of Visaranai. Notably, Vetri Maaran has presented the film, too!

Suresh Ravi shows good promise with this outing and with good moulding, he has the potential to become a solid actor. He scores well with the serious scenes and shows his anger in several places. At the same time, he could’ve done better in the romantic and conversation scenes with his wife. Raveena, as a doting wife, is impressive and justifies her character. Her chemistry with Suresh Ravi works in favour of the film. The show-stealer, however, is Mime Gopi who plays the egoistic and dominant Kannabiran. He shows arrogance through his eyes perfectly and he is a delight to watch. As a character, you’d definitely hate him and root for the protagonist, but as a performer, you are just going to love him.

On the technical side, Adithya - Soorya’s background score adds good intensity to the film. Vishnu Shri’s visuals supplement director RDM’s vision. However, the lack of resources and the low production value is seen in a few sequences.

Debut director RDM needs to be applauded for his earnest efforts in making Kavalthurai Ungal Nanban without any dilution. His sincere filmmaking effort is what makes KUN a solid gripping watch. On the flip side, he could have probably had one or two good-hearted cops inside the police station to strike a balance as it looked like the story was conceived comfortably to project the protagonist's character in a particular way.

Verdict: Kavalthurai Ungal Nanban hits you hard with its harsh reality and strong content! Go for it!