A project that has set everyone talking even before an official announcement was made a couple of months back, the upcoming film tentatively titled, Thalapathy 64, will see actor Vijay and director Lokesh Kanagaraj of Maanagaram and the upcoming Karthi starrer, Kaithi, come together for the first ever time. Fans everywhere are excited after it was revealed that Vijay’s relative, Xavier Britto, was announced to be producing the venture under his XB Film Creators banner, as the film also includes an exciting casting lineup featuring stars like ‘Makkal Selvan’ Vijay Sethupathi, Shanthanu Bhagyaraj, Malavika Mohanan and Malayalam sensation, Antony Varghese in important roles with music set to be composed by Anirudh Ravichander. With a number of notable names already in Thalapathy 64, director Rathna Kumar of Meyaadha Maan and the Amala Paul starrer, Aadai, has now announced that he has also hopped aboard the film as an additional screenplay writer and expressed his joy at joining the team while also thanking Vijay, Lokesh Kanagaraj, writer Pon Parthiban and Line Producer, Jagadish, for being included in the project. Rathna Kumar has often professed that he is an ardent Vijay fan and it will be mighty interesting to witness what he goes on to cook along with Lokesh Kanagaraj for the film next. Check out his tweet below: 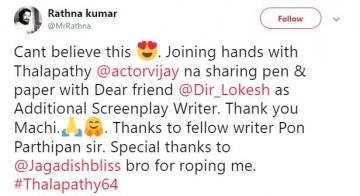 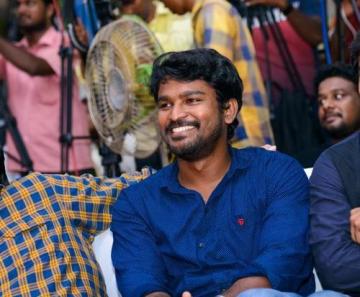 Thalapathy 64 will also be Xavier Britto’s next association with Vijay after their earlier ventures, Senthoora Pandi and Rasigan, in the 1990s and also has Seven Screen Studio’s Lalit Kumar as the second Line Producer followed by cinematographer Sathyan Sooryan, editor Philomin Raj, art director Satheesh Kumar and Stunt Silva, who will be taking care of the action in the film. 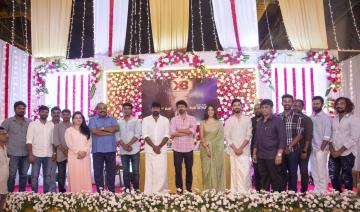