A film that continues to be a memorable one among fans of 'Vaigai Puyal' Vadivelu is his 2006 historical-comedy, Imsai Arasan 23Aam Pulikesi, with a sequel titled, Imsai Arasan 24Aam Pulikesi, flagging off in August 2017. However, the film to be directed by Chimbu Deven of the recently-released Kasada Tabara met with an unexpected setback when differences arose between the team and the comedy superstar. When queried back at the time for the film to come to a halt, the team had alleged that Vadivelu's non-cooperation was the primary cause for the production to be stopped. Blockbuster director Shankar, who announced Imsai Arasan 24Aam Pulikesi under his S Pictures banner in collaboration with Lyca Productions, later filed a complaint against Vadivelu with the Tamil Film Producers Council (TFPC).

Three years since the controversy, a solution to the issue between Shankar and Vadivelu has been found, with the TFPC on Friday issuing a press release stating as follows: "Director Shankar of S Pictures, a member of the TFPC, filed a complaint against actor Vadivelu regarding Imsai Arasan 23Aam Pulikesi-II. Based on the complaint, we would like to inform via this statement that we had invited Vadivelu and representatives from S Pictures for a discussion in person with TFPC's office-bearers, and have arrived at an amicable solution to the issue."

These latest developments will no doubt come as a massive delightful news for fans, who enjoyed Imsai Arasan 23Aam Pulikesi, and will be looking forward to an announcement soon on the sequel, Imsai Arasan 23rd Pulikesi-II. Fans will certainly be hoping to witness Vadivelu once again twirl his iconic moustache as Imsai Arasan Pulikesi, with more new updates on the venture expected sometime soon. Below is the official press release from the Tamil Film Producers Council: 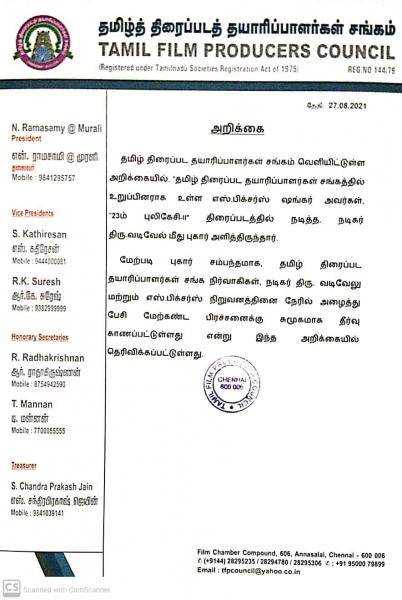