A film that is undoubtedly one of the most-awaited ventures for Suriya's fans in recent years, Soorarai Pottru, gearing up for a big summer release has been directed by Irudhi Suttru fame Sudha Kongara. Aparna Balamurali plays the female lead alongside veteran actor Mohan Babu, Karunas, among others in supporting roles in the film, which has been produced by Suriya under his 2D Entertainment in association with Guneet Monga's Sikhya Entertainment banner and featuring music G. V. Prakash Kumar to the lyrics penned by Vivek.

It came as a massive surprise when it was announced that the second track from Soorarai Pottru titled 'Veyyon Silli' would be launched mid-air on the Spicejet Boeing 737 flight today in the presence of the airliner's Chairman, Mr. Ajay Singh, and 100 first time flyers among whom include school students and their parents. The 'Veyyon Silli' song was launched mid air as announced amidst much fanfare with Suriya later interacting with the press about the second single track as well as Soorarai Pottru, in general.

During his speech, Suriya expressed his gratitude towards Spicejet Chairman, Ajay Singh, and the Airports Authority of India for facilitating the 'Veyyon Silli' single track launch. He stated, "Every invention has a value and unless it is feasible and applicable for the public, it becomes meaningless. Only less than 1% of the Indian population was able to fly and it was Captain Gopinath sir who came and changed the Indian aviation industry by making the common man fly by spending just Re. 1. Director Sudha Kongara has spent nearly 10 years creating this film and making it a possibility. I thank all the people at Spicejet and the officials for making this film achievable because we have 30 minutes of footage with the airline and I can't thank enough. In my film career, this is the best time I have gone through. No matter the number of accolades that will come Soorarai Pottru's way, Sudha Kongara completely deserves it." 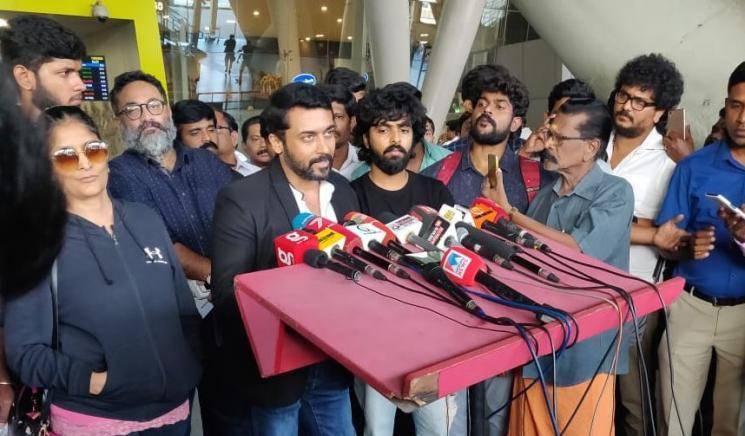 Check out Suriya's full speech for the 'Veyyon Silli' song launch from Soorarai Pottru below: