Popular singer and musician Suchitra is back home after her special visit to the Bigg Boss house and it looks like this new visit has indeed made her realise a few important things. First and foremost, Suchitra mentioned on her Instagram story that Aari deserves to win the title. Sharing a screenshot of voting for Aari, Suchi wrote, “Would be a terrible injustice if Aari Arujunan doesn't win BBT4. Whether you're a fan or not, please vote for him! Real life hero,”. It is a known fact that Suchi had a very good rapport and friendship with Balaji Murugadoss and she has always expressed her love for him. But, it looks like her recent visit to the Bigg Boss house has made her realise that Aari deserves to win the title.

Suchi also requested her followers to vote for Aari and make him the deserving winner. This change from Suchi has come as a surprise for a lot of people. Suchitra and other housemates’ exit from Bigg Boss will be aired in tonight’s episode. Suchi also penned a poem after coming out of Bigg Boss house. She shared the poem on her Instagram page. The poem reads,

No pain, no gain they say
And delightedly prod your pain when you're low
Send you ahead of the queue to Death Row
The audience cheers, the Host takes a bow

Sometimes you need to get sucked in
And spat out, into the now
Injured by blows delivered below
But hey, you get to keep the scars to show!”.

This poem has been receiving a good reception from the fans. Below this post, one of the fans asked Suchi to guess whom she thinks will be the winner of this season. Suchi was confident enough and picked Aari as her choice. She also added that if Aari does not win the title, it would be only because of some internal politics. Suchi commented, “No guesses required. Nothing can stop Aari from winning, except internal politics”.

Suchi’s posts have been garnering attention from the fans and people are supporting her thoughts about Aari. The grand finale of Bigg Boss Tamil Season 4 will be aired on January 17, Sunday evening from 6 PM on Vijay TV and Disney + Hotstar platform. For now, check out the screenshots of Suchi’s latest posts after coming out of Bigg Boss: 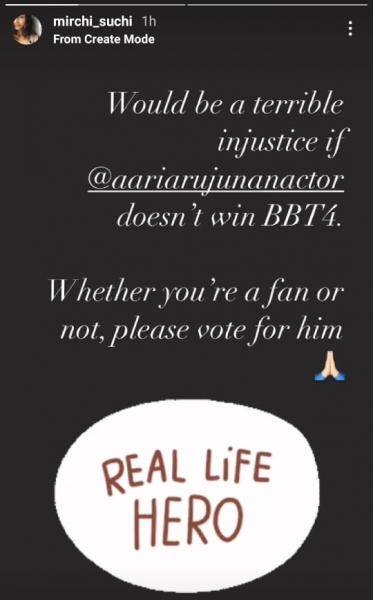 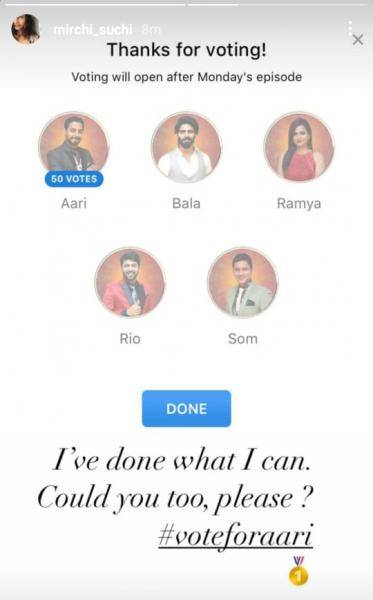