OFFICIAL: Manju Warrier's next big film after Asuran - check out!

Manju Warrier was highly praised for her performance in the recently released blockbuster film, Asuran, in which she was paired opposite Dhanush. Manju played the character of Pachaiyamma and her emotionally moving performance struck a chord with the audience. The ace actor has now officially come up with the announcement of her next film. Manju will next be seen as the lead in director Rosshan Andrrews' next film which is titled as Prathi Poovankozhi. This film will mark the reunion of Manju with Rosshan after the superhit success of How Old Are You.

Prathi Poovankozhi will also see Rosshan making his debut as a full fledged actor. Manju Warrier plays the role of a sales girl and her character is called Madhuri. Manju, in her latest official Twitter post, revealed that the first look poster of Prathi Poovankozhi will release tomorrow (November 20). The first single from the film will release the next day, i.e., on November 21.

The makers are planning to release the film on December 20, ahead of the Christmas weekend. The film went on floors in September this year and it looks like the team is wrapping up the film in no time. Prathi Poovankozhi will be Manju Warrier's next big release after Asuran and she will be looking forward to continue the success streak. 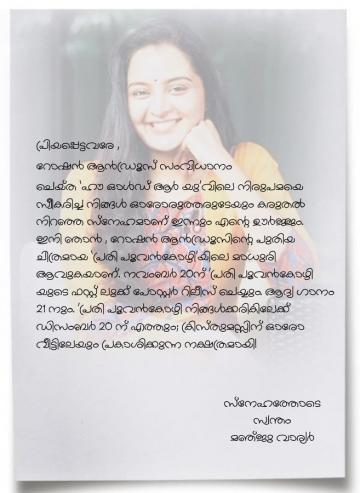 For all those good hearts who r requesting to write the content in English too , this is the first look poster announcement (cmng on Nov 20th) of my new movie #PrathiPoovanKozhi directed by #RosshanAndrrews. We are joining hands once again after my comeback film #HowOldAreYou. pic.twitter.com/8N8TIeNPQA

Dhruv Vikram reveals the real Adithya Varma - check out who it is!

Eesha Rebba's New Movie Making Video Is Out! Check Out!

Breaking: After Bigil, it is going to be with Rocky director!