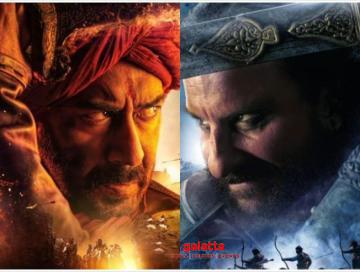 Filmmakers have made epic films that appeal to audiences with a few from India also making heads turn across the world among which include recent ones such as Baahubali, Padmavat, Jodha Akbar, Bajirao Mastani and a few others. Likewise, the upcoming Hindi biographical period drama film, Tanhaji: The Unsung Warrior, starring Ajay Devgn, Saif Ali Khan, Kajol, Jagapathi Babu, Pankaj Tripathi and Sharad Kelkar in the lead roles is gearing up for a huge release next. Based on the life of Tanaji Malusare, the military leader in the army of Chhatrapati Shivaji Maharaj, founder of the Maratha Empire, the film has been directed by Om Raut under the joint collaboration of Ajay Devgn FFilms and T-Series banners. With the songs composed by the Ajay-Atul and Sachet–Parampara duos and Mehul Vyas followed by the musical score by Sandeep Shirodkar, the much-awaited Tanhaji trailer has now been released.

Tanhaji: The Unsung Warrior is Ajay Devgn’s 100th film and will see him portraying the titular role of Subhedar Tanaji Malusare in the film, which is coming out in 3D when it hits screens worldwide on January 10, 2020. There are tremendous expectations surrounding Tanhaji considering the legendary military leader has been described by the makers as “an unsung warrior of glorious Indian history”.

Check out the action-packed epic visuals from the Tanhaji trailer below: