A film announcement that sparked instant excitement among all fans was when it was revealed on Valentine’s Day last year that 'Makkal Selvan' Vijay Sethupathi and Nayanthara would be seen on the big screen once again in the upcoming Kaathuvaakula Rendu Kaadhal under Vignesh Shivan's direction. Vignesh Shivan is leading the charge for Kaathuvaakula Rendu Kaadhal with the two after their 2015 blockbuster Naanum Rowdydhaan, which will incidentally also be the third time Vijay Sethupathi and Nayanthara will be seen together, including the duo's last collaboration, Imaikkaa Nodigal, in 2018. As known already, actress Samanatha Akkineni too will be seen powering the star cast, with 'Rockstar' Anirudh Ravichander for the music, whose first song in the film titled 'Rendu Kaadhal' featuring lyrics by Vignesh Shivan turned out to be a chart-buster.

With production on Kaathuvaakula Rendu Kaadhal put on hold due to the COVID-19 pandemic lockdown, shooting on the film is expected to resume once the lockdown restrictions are relaxed around Tamil Nadu. In the meantime, Vignesh Shivan, who is known to be active on social media, interacted with fans on Instagram late Saturday evening and answered many queries, including one about the second single track from the film. Vignesh had informed followers that the much-awaited second song from Kaathuvaakula Rendu Kaadhal will be out in July, with the response to his announcement turning out to be highly positive. The Anirudh Ravichander-Vignesh Shivan combo has spelled success in the past as their associations that include Naanum Rowdydhaan and Thaanaa Serndha Koottam, including several other occasions where the two have joined hands for songs in other stars' ventures have received a positive feedback. 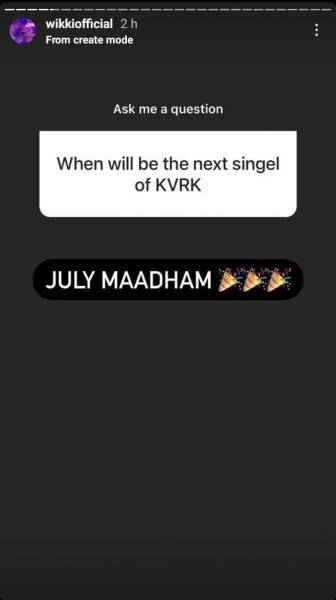