Ashwin Kumar alerts his fans on fake Facebook page that is being used in his name!

Cook with Comali sensation Ashwin Kumar took to his official Instagram page to alert his fans and followers on a fake Facebook page that is being used in his name. Sharing a screenshot of the page, Ashwin asked his fans to report the page, thereby requesting people not to be falsely guided. This immediate clarification from Ashwin Kumar will now make the fans aware of the authenticity of the Facebook page. Ashwin Kumar must currently be elated with the massive success of his latest music video, 'Adipoli', composed and directed by Siddhu Kumar.

The song has turned out to be a treat for the fans and music lovers and it has garnered wide attention on social media. 'Adipoli' has been crooned by Vineeth Sreenivasan and Cook with Comali fame Sivaangi, with whom Ashwin shares a special rapport. Adipoli is the first official project that marks the collaboration of Ashwin and Sivaangi and the song will indeed stay special for the fans. Ashwin Kumar is currently shooting for his debut Tamil film as a lead actor, Enna Solla Pogirai, directed by debutant Hari Haran. Produced by Trident Arts, the film has music composed by Vivek - Mervin and cinematography handled by Richard M Nathan.

The film features Teju Ashwini and Avantika Mishra as the female leads, while Cook with Comali star Pugazh will be seen playing an important role. The makers recently wrapped up one big schedule in Chennai and details regarding further schedules are awaited. The film has got high expectations among the fans and film buffs. Enna Solla Pogirai is a romantic comedy that will deal with a triangular love story.

Ashwin will also be making his debut in Telugu cinema with the upcoming anthology film, Meet Cute, directed by Nani's sister, Deepthi Ganta. Nani has bankrolled this film under the banner of Wall Poster Cinema. For now, check out Ashwin's latest clarification on the fake Facebook page that is being used in his name, here: 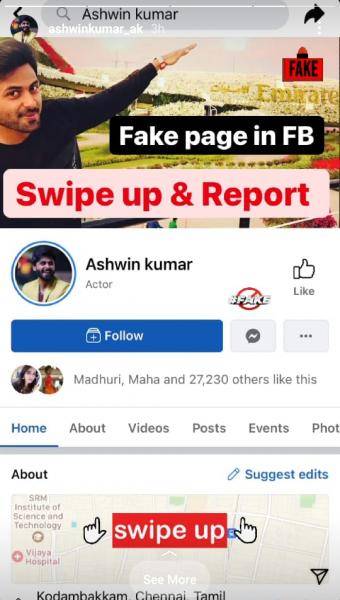