Bigg Boss fame Balaji Murugadoss opens up about his marriage plans! Check Out!

Bigg Boss fame Balaji Murugadoss recently opened up about his thoughts and plans for marriage and his response has garnered the attention of the fans. Balaji recently interacted with his fans and followers through his Instagram page and during the interaction, he answered several interesting questions. One of the fans asked Balaji about his wedding plans, the young and handsome hunk responded saying that he is in no mood to get married anytime soon. Talking about it, he wrote, "Everyone asking this! Naan ipo dhan college mudicha feeling la irukan. Not gonna think about it for years".

Well, it looks like Balaji is very much clear that a wedding is not on cards anytime soon. Apart from this, Balaji also answered several other questions on fitness and his likes and dislikes on various topics. Balaji also shared throwback pictures of him from his school and college days. For the unversed, Balaji Murugadoss is one of the popular models and budding actors in Tamil, who got his massive breakthrough after participating in the fourth season of Bigg Boss Tamil. Balaji garnered wide attention for his straightforward character and he managed to make some noise inside the house.

During his stay inside the house, he managed to make a connection with the audience after narrating his emotionally traumatic childhood days and support poured in from all quarters for the young talent. Balaji emerged as the runner up of the show, thereby becoming one of the promising talents that came out from Bigg Boss. Balaji Murugadoss is also a recipient of the Mr International India in 2018.

Balaji has acted in an important role in Meena's web series, Karoline Kamakshi which is streaming on Zee 5 platform. Balaji has also featured in several ad commercials. For now, check out Balaji Murugadoss' latest reply about his wedding plans here: 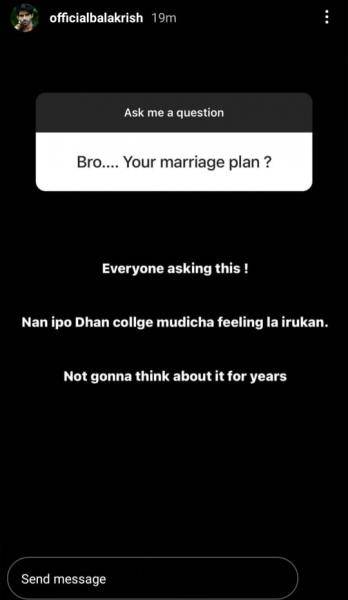