Blockbuster hit Tamil film director Atlee has been keeping himself busy with the work on the script for his next film, which many have speculated for a while now to be with Bollywood superstar Shah Rukh Khan. As there are various reports strongly indicating Atlee will be making his Bollywood debut with SRK in the lead role in the film, the excitement and curiosity among fans is only getting bigger with each passing day. That said, Atlee has now gifted Shah Rukh Khan's manager Pooja Dadlani with a special face mask for her safety and protection against the novel coronavirus.

Happy with the special surprise she received from Atlee, Pooja Dadlani posted a selfie wearing the mask on her Instagram Stories. She thanked the blockbuster Tamil director and wrote, "Thank you @atlee47 for my extra protective gear on sets!! And makes me look super cool and different too!!" Although SRK has been filming his next film, Pathan, with John Abraham and Deepika Padukone for sometime, there have been reports stating that he will be collaborating with Atlee once he completes his ongoing venture. There have also been reports for a while now that the project might already have a title, with an official announcement currently being awaited. 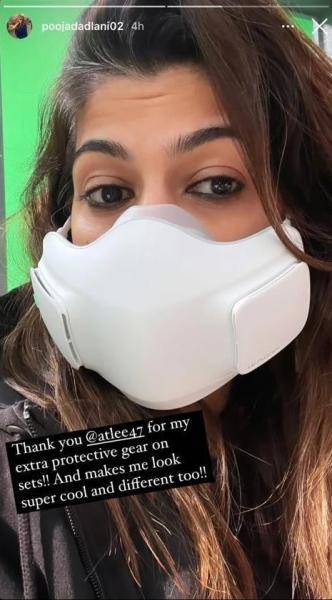 Expectations for Atlee's next are massive considering he has a stellar record with smash box office successes all the way in Tamil. Having started out with the hit romantic drama, Raja Rani, starring Arya, Nayanthara, Jai and Nazriya, Atlee followed it up by joining hands with 'Thalapathy' Vijay on three consecutive occasions starting with Theri (2016), Mersal (2017) and Bigil (2019). All three films with Vijay turned out to be money spinners and in turn also propelled him into an A-list director and Atlee will no doubt be looking to carry forward that momentum next hopefully in Bollywood.

WOW: Atlee picks the hero for his next film - blockbuster combo all set to reunite!