'Superstar' Rajinikanth will next be seen in the highly-anticipated Annaatthe, which marks the iconic actor’s third-time association with blockbuster production banner Sun Pictures after their previous collaborations namely Enthiran (2010) and Petta (2019). Directed by Siva of Siruthai, Vedalam and Viswasam fame, the upcoming  film is touted to be a mass rural family entertainer and features music by D. Imman, with promotions kickstarting last week as the makers unveiled the Annaatthe first look and motion poster. Both have since then received a staggering feedback from fans, who have since taken to social media to express their joy and satisfaction at witnessing the ‘Thalaivar’ swag once again.

In that light, a shocking news has now come to light after photos and videos of some fans slaughtering a goat as part of the Annaatthe first look poster celebrations has created a big furore. Now, Sudhakar, the administrator of the All-India Rajinikanth Fans Association has issued an official press release on behalf of the veteran actor, which states: "A video is doing the rounds showing a goat being sacrificed and its blood being smeared on the Annaatthe first look poster. This is highly disturbing news and we request everyone to not adhere to such practices in the future." Below is the official statement: 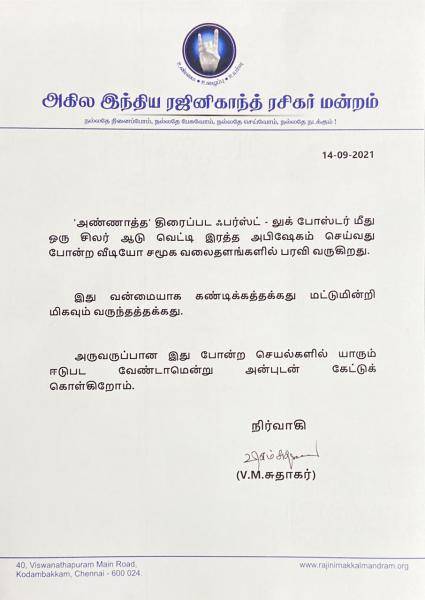 Announced for a grand Diwali release on November 4, Annaatthe will see Rajinikanth once again amidst a rural backdrop after he was last seen in a similar milieu in the 1999 blockbuster Padayappa. Expectations for Annaatthe are huge considering Rajinikanth will be sharing screen space once again alongside actresses Khushbu and Meena after more than two decades. Some other major names in the film include Keerthy Suresh, Nayanthara, Prakash Raj, Soori, Jagapathi Babu, Abhimanyu Singh, Sathish among others in pivotal roles.

Kangana Ranaut officially announces her next film after Thalaivii - an EPIC film!