Yashika Aannand's sister gives a health update - thanks fans for their prayers!

Tamil film celebrities and fans are still reeling from the shock of actress Yashika Aannand and her friends meeting with a car accident on Sunday (July 25). The accident saw one of Yashika's friends, Pavani Valicheti, succumbing to her injuries and passing away on the spot. With Yashika and two other persons who accompanied them currently hospitalised and undergoing treatment, the popular actress' younger sister Osheen Anand released a statement on her Instagram Stories. Sharing the news that Yashika is conscious now, Osheen informed that one important surgery has been completed successfully, while adding that other surgeries will be performed for her multiple fractures in the next few days.

Extending her gratitude to all those who prayed for her sister Yashika, Osheen wrote, "hello everyone thank you for your prayers @yashikaaannanid is conscious now and one of her surgery is done successfully by gods grace she is currentlu in ICU and further surgeries of her multiple fractures will be done in quite few days please keep praying for her." Initially, it was reported that Yashika had sustained fractures on her leg, hip and hands after the accident in Sulerikadu near Mahabalipuram. Following the accident, there have been reports stating the Mahabalipuram Police registered cases against Yashika for overspeeding (as she was driving the car), and also in regard to the death of her friend Pavani Valicheti. Below is Yashika's sister Osheen's statement: 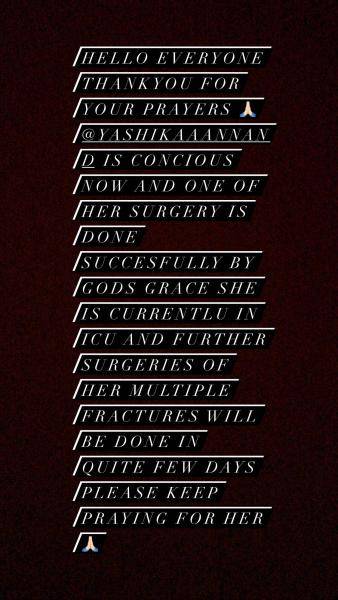 Earlier, Yashika's close friend and actress Aishwarya Dutta took to her Twitter page to inform fans that Yashika was doing fine. She tweeted, "My friend is fine and will be fine soon … her willpower is standing strong." Likewise, filmmaker turned actor SJ Suryah, who co-stars with Yashika in their upcoming film Kadamaiyai Sei, too conveyed his wishes for her speedy recovery and tweeted, "Friends U all know @iamyashikaanand a great looking girl….But we know she is an awesome performer too… KADAMAIYAI SEI will be the right beginning of her journey as a performer…..get well soon Yashika to be where you have to be…prayers."