Hindi television actor Shoaib Ibrahim's father has been admitted to hospital and is in the intensive care unit (ICU) after suffering a brain stroke. The actor took to his Instagram Stories asking fans for "prayers and strength". Shoaib wrote, "Need you Prayers & strength once again!! Papa has had a brain stroke today morning and is in the ICU presently!! Please please aap sab dua kijiyega ki Allah unhe theek kar dein (Please pray for his speedy recovery)", with his wife Dipika Kakar also reposting the post on her Instagram Stories.

Earlier, Shoaib's father had hospitalised in February this year. The actor shared a post from the hospital on February 14 with his father and captioned it, "Alhamdulilla". According to Zoom TV, Shoaib then shared on his Instagram Stories, "Thank you aaapsab ko, Papa ke liye itni saari duaon ke liye aur itna pyar dene ke liye. Papa ki aaj surery thi, Aur Allhamdullilah wo ab theek hain, under observation hain, Inshallah do din mein chalne bhi lagenge. Aap Sab ki duaon ka bahut bahut shukriya (Thank you to all of you, for your prayers and the love you have shown towards my father. He underwent surgery today and is being kept under observation. By God's grace, he is now doing fine and we expect him to start walking in two days. Thank you for your prayers)." 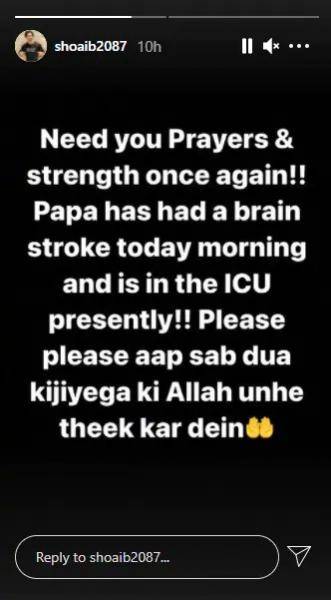 Shoaib Ibrahim made his acting debut on the television show, Rehna Hai Teri Palkon Ki Chhaon Mein. His shot at popularity came on the show, Sasural Simar Ka, where he was cast with Dipika and the two soon became close friends. They later dated and eventually tied the knot in 2018 and have been living in Mumbai.

Anirudh Ravichander lends his voice for a song in Rajamouli's RRR!