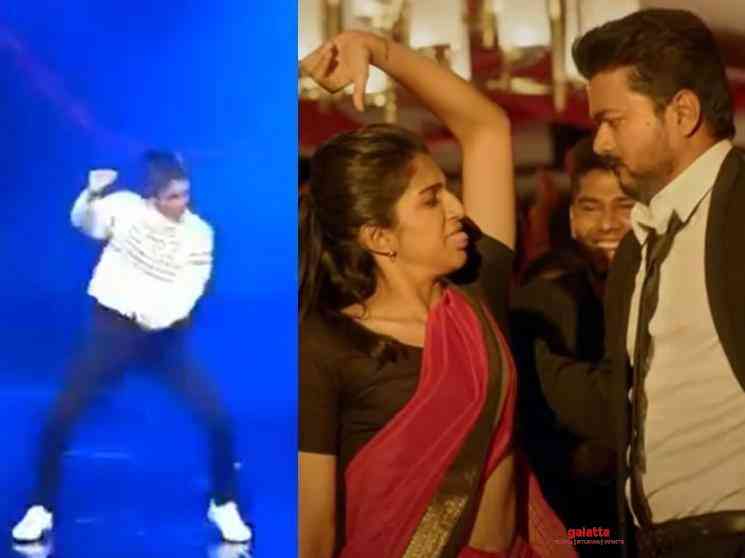 Vinaya Sesha, the extremely gifted dancer cum football player was recently in playing the character of a goalkeeper in Thalapathy Vijay’s recent sports drama film Bigil. Vinaya Sesha became famous when she won three medals at the 2017 dance world cup event which was held in Germany. Vinaya won a gold medal in the duet category, as well as Bronze medals in the Hip Hop group and Hip-Hop Solo categories.  Though, the hardly had many dialogues in Bigil to prove her acting skills, still she showed up as an excellent football player in the film. She even danced together with Thalapathy Vijay in one of the songs called Bigil Bigiluma. Vinay Sesha has now danced for a song from Vijay’s upcoming film Master. Yes, the talented youngster during a recent event had choreographed and danced for Kutty Story song composed by Anirudh Ravichander for Vijay’s movie Master. She posted the dance video on her Twitter account with the text that reads as follows - “When you groove to a Thalapathy @actorvijay song, you feel some verelevel swagger Here's a glimpse of #Kuttistory from #showdown_uk ;) had a great deal of fun performing after ages Hope you all like it.”

🌪️ When you groove to a Thalapathy @actorvijay song, you feel some verelevel swagger 🌪️

Here's a glimplse of #Kuttistory from #showdown_uk ;) had a great deal of fun performing after ages ☺️ Hope you all like it ❤️ pic.twitter.com/l0pZ9B59V4

Bigil was one of the biggest movies of 2019 is Thalapathy Vijay's Bigil. This movie, starring Vijay in the lead, was directed by Atlee and produced by AGS Entertainment. Bigil had Vijay in dual roles, that of father and son, with Nayanthara playing the female lead. This 63rd movie of Vijay's career, had a lot of expectations on it, right from the time it was announced. The excitement kept building into a crescendo till the movie hit the screens for Deepavali 2019. This sports action drama was made on a massive budget of nearly Rs. 180 Crores but broke Box Office collections across the world, and this movie has also become the highest grosser of Kollywood in 2019. The film was recently aired on Sun TV and the Vijay fans are still not done praising about the film on social platform. We wish Vijay repeats the success of Bigil with his next film Master.