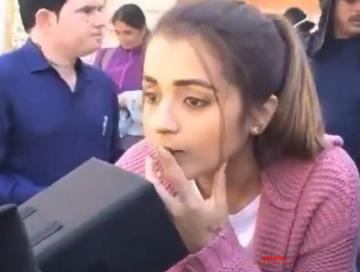 Actress Trisha was last seen in a cameo role in Superstar Rajinikanth's blockbuster outing, Petta. She has films like Garjanai and Paramapadham Vilaiyattu which are in the post productions stages, gearing up for its theatrical release. Apart from these projects, she has Raangi, an interesting action thriller directed by M Saravanan of Engeyum Eppodhum and Ivan Vera Mathiri fame. Bankrolled by Lyca Productions, this film has music by C Sathya and cinematography by KA Shakthivel.

The final schedule of Raangi is right now happening at Uzbekistan and once this schedule is done, the film will move on to the post production phase officially. A new video from the shooting spot of Raangi has now been doing the rounds on social media and we see a glimpse of the action sequences being shot. Director Saravanan looks to be very keen on giving his best shot through Raangi and that is seen through this new video.

Thanneermathan Dinangal fame Anaswara Rajan is also seen in this video and she is said to be playing a very important role in the film. Trisha will be seen as the CEO of a private online media portal in Raangi which has story penned by director A.R.Murugadoss. For now, check out this newly released video from the sets of Raangi: