Jayalalithaa's biopic team pay homage to the legend on her death anniversary! Pic inside... 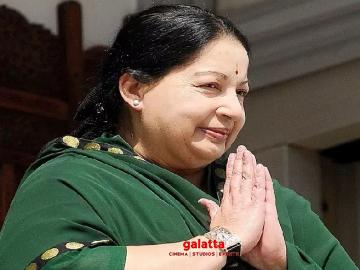 Dr. J Jayalalithaa, the late Chief Minister of Tamil Nadu was more than just an actor or a politician. She was a phenomenon who broke all social stigma and turned from being an actress to a formidable political figure who ruled the state of Tamil Nadu and won over the hearts of crores of followers. Following a prolonged illness, Jayalalithaa succumbed to a cardiac arrest on December 5th, 2016. In the years since, many filmmakers clamoured to make her biopic and of the few that actually took off, is director Vijay's Thalaivi. This movie is touted to be a Tamil, Telugu and Hindi multi-lingual with Kangna Ranaut playing Jayalalithaa's role.

Today (December 5th), marks the third year death anniversary of the legendary star and many film industry celebrities, politicians and followers of Jayalalithaa have been paying homage to her. The Thalaivi team also took some time off from their shoot to pay their respects and observe a few minutes of silence and a photo of Kangna Ranaut offering homage has been released. Earlier, the first look and teaser of Thalaivi were released on 23rd November. Kangna's appearance as Jayalalithaa came in for mixed reviews and a section of the audience felt that she did not suit the role. However, the actress has put in a lot of effort to prepare herself for this movie.

Thalaivi will see Arvind Swami playing the role of another legendary actor and former Tamil Nadu Chief Minister - MG Ramachandran, who was fondly known as MGR. This movie is being bankrolled by Vishnu Vardhan Induri and Shailesh R Singh under the Vibri Media & Karma Media And Entertainment banners. The movie's shoot is underway and there are some speculations that Priyamani would be seen playing the role of Sasikala, Jayalalithaa's close confidante. Some rumours also abound that Vijay Deverakonda will be seen playing Sobhan Babu, in Thalaivi. However, these two actors being a part of this movie, has not been officially confirmed. Thalaivi is slated to hit the screens on June 26th, 2020!

#KanganaRanaut who is all set to play #Jayalalitha in the upcoming movie #Thalaivi paid her homage to the iron lady & observed a few minutes of silence on the sets of Thalaivi on the occasion of her death anniversary pic.twitter.com/9b6oYT21jR