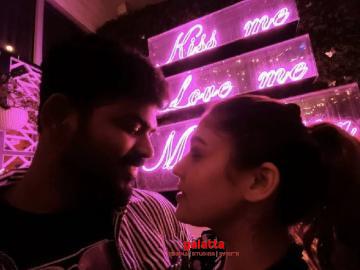 November 18th marked the birthday of the 'Lady Superstar' Nayanthara and she is away on a special vacation with director Vignesh Shivn, to Manhattan, New York and Miami! The young duo celebrated the special day together and photos of the two came out on social media and went viral! Rowdy Pictures, the production house started by Vignesh Shivn, is currently bankrolling their maiden venture Netrikann, which is being directed by Milind Rau of Aval fame. The Rowdy Pictures team celebrated Nayanthara's birthday on an interesting note!

The Rowdy Pictures team served food for over 1000 underprivileged people, including orphans. The team visited over four orphanages and a school for the visually challenged and served the children and people there, in various locations across Chennai. This is indeed a heartwarming gesture by the Rowdy Pictures team, which included Netrikann's co-producer KS Mayilvaganam. Photos from these celebrations have already been doing the rounds on the internet.

Currently, Nayanthara has a number of movies in hand, including Superstar Rajinikanth's Darbar, Netrikann with director Milind Rau and the recently announced Mookuthi Amman, which is being co-directed by RJ Balaji. The shoot for Darbar has already been wrapped up and Rajinikanth has also completed dubbing for it. RJ Balaji is scouting for locations for Mookuthi Amman, for which Nayanthara has turned vegetarian and also requested the entire team of the movie to follow suit.

Check out these pics: