Leading Indian actress Priyanka Chopra reportedly earns 403,000 (Rs 3 crore) for each promotional post and has landed at the 27th spot on the Hopper Instagram Richlist this year. The list released annually ranks celebrities, sports personalities and other high profile individuals from around the world and shows how much they are charging for each of the posts they promote on Instagram. Priyanka, who has around 64 million followers on Instagram, was incidentally on the 19th spot last year and was making around  $271,000 per post. 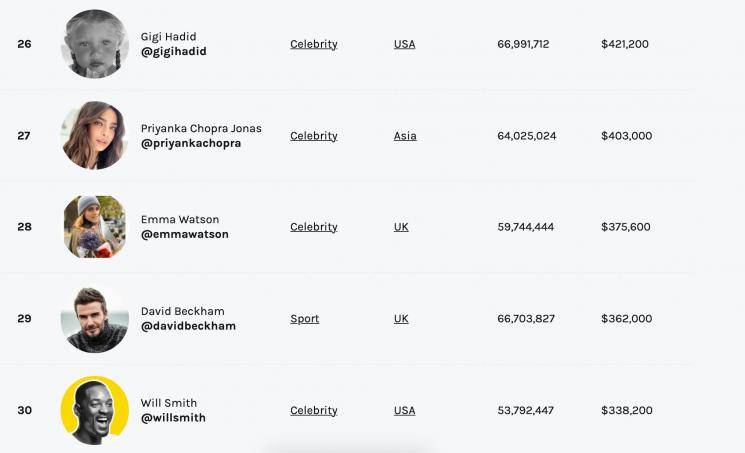 With 125 million Instagram followers, Cricketer Virat Kohli is the only other Indian to be featured in the top 30 rich list as he has gone past Priyanka Chopra to take the 19th spot with earnings up to $680,000 (Rs 5 crore) per post and is a significant rise compared to last year when he was at the 23rd spot. Portugal and Juventus F.C. football superstar Cristiano Ronaldo with 295 million followers has once again topped the list and earns $1,604,000 (Rs 11 crore) per post. Some other big names on the list include Dwayne Johnson, Ariana Grande, Kylie Jenner and Taylor Swift.

Priyanka Chopra, who debuted first in Tamil opposite 'Thalapathy' Vijay in 2002 in the action drama, Thamizhan, went on to dominate Bollywood and has since made a highly successful transition to Hollywood. As reports have been rife that she will be featuring in The Matrix 4, Priyanka was recently announced to be the new face of global lingerie brand Victoria's Secret. Taking to Instagram to share the news, Priyanka wrote, "Representation matters. It’s crucial for us to show everyone ALL over the world that they matter and are seen! As a founding partner of #TheVSCollective and advisor to the business this is exactly what I intend to do." She added, "It’s been so incredible to see your reactions to yesterday’s announcement. It’s fuelled me further and I am excited to bring about meaningful change at one of the worlds most iconic brands. I’m so proud to be in the company of the Collective of incredible women that will helm this change."